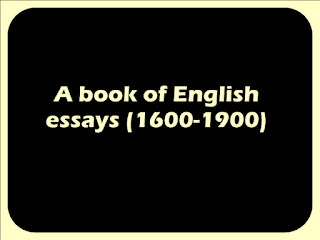 Collection of essays of famous English men  collected by the editor
In selecting the following Essays we have been guided by a desire to secure variety, not only in the outlook and equipment of our authors but also in the subjects by which we have chosen to represent them. It was our object to set before the reader a rich and entertaining banquet rather than to make a bid for the critic's recognition of the supreme merits of each dish. In other words, we have wanted the essays chosen to differ from one another as widely and in as great a variety of ways as was compatible with the resolution to maintain a high level of excellence throughout the book.
In conformity with this plan, we have chosen relatively few essays on literary subjects. To be made acquainted with a master's thoughts on some common topic of daily life is to enjoy a rarer and a more profitable glimpse of his genius than we can get by reading his opinions on the work of a brother author. Bacon and Goldsmith, differing from each other so profoundly and in so many ways as to offer the best because the most widely divergent standards for the comparison and contrast of all other essays agree in this, that they avoid writing on literary subjects.
To all save the student of poetry Addison is less entertaining when he writes of Milton than when he writes of Popular Superstitions. Of the word Essay, it is necessary to say something, because at different times it has borne different meanings. Johnson's definition of it as * a loose sally of the mind; an irregular undigested piece *, covered its employment by authors to excuse shortcomings, and to disarm the critic in his examination of a work which boasted of no pretence to literature. Some such idea of admitted or implied failure in a worthy experiment adhered to Montaigne's use of the word in those Essais which were published in 1580.
But the decay of this sense began in fact with this publication, although the author expressed his apology for being * something fantastical '. For that very wandering from point to point which in Montaigne was a habit of mind, was developed by the English essayists of the eighteenth century into a deliberate study. Out of what Montaigne would have been only too pleased to call ' irregularity and want of finish ' they invented a literary quality which in Goldsmith rose to the perfection of carelessness in approaching and retreating from a subject. It was in another direction from that taken by Montaigne and his followers that Bacon enlarged the meaning of the word essay in literature. He applied it to his pieces not in the sense of * an experiment ', but in the sense of ' a test or assay '. He weighed and examined his subjects one by one.
Download PDF book 14.5 MB