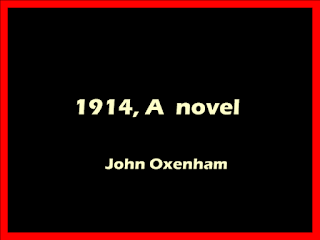 John Oxenham (William Arthur Dunkerley) was an English journalist, novelist and poet. He was born in Manchester, spent a short time after his marriage in the US before moving to Ealing, West London, where he served as deacon and teacher at the Ealing Congregational Church from the 1880s.
Excerpt :
The novel was published in 1916
The early morning of July 25th, 1914, was not at all such as the date might reasonably have led one to expect. It was grey and overcast, with heavy dew lying white on the grass and a quite unseasonable rawness in the air. The clock on the mantelpiece of the morning-room in The Red House, Willstead, was striking six, in the sonorous Westminster chimes, which were so startlingly inconsistent with its size, as Mr John Dare drew the bolts of the French window and stepped out on to his back lawn. He had shot the bolts heavily and thoughtfully the night before, long after all the rest had gone up to bed, though he noticed, when he went up himself, that Noel's light still gleamed under his door.
His peremptory tap and ' Get to bed, boy ! ' had produced an instant eclipse, and he determined to speak to him about it in the morning. He had never believed in reading in bed himself. The bed was a place in which to sleep and recuperate. If it had been a case of midnight oil and the absorption of study now all well and good. But Noel's attitude towards life in general and towards study, in particular, permitted no such illusion. And it was still heavily and thoughtfully that Mr Dare drew back the bolts and stepped out into the grey morning.
Not that he knew definitely that this twenty-fifth of July was a day big with the fate of empires and nations, and of the world at large, simply that he had not slept well; and "1914" bed, when you cannot sleep, is the least restful place in the world. As a rule, he slept very soundly and woke refreshed, but for many nights now his burdened brain had neglected its chances and had chased, and been chased by, shadowy phantoms, possibilities, doubts, even fears, which sober daylight scoffed at, but which, nevertheless, seemed to lurk in his pillow and swarm out for his undoing the moment he laid his tired head upon it. Out here in the fresh of the morning, which ought by rights to have been full of sunshine and beauty, the cream of a summer day, he could, as a rule, shake off the shadows and get a fresh grip on realities and himself. But the very weather was depressing.
The year seemed already on the wane. There were fallen leaves on the lawn. The summer flowers were despondent. There was a touch of red in the Virginia creeper which covered the house. The roses wore a downcast look. The hollyhocks and sweet peas showed signs of decrepitude. It seemed already Autumn, and the chill damp air made one think of coming Winter. And the unseasonal atmospheric conditions were remarkably akin to his personal feelings.
For days he had had a sense of impending trouble in business matters, all the more irritating because so ill-defined and impalpable. Troubles that one could tackle in the open one faced as a matter of course, and got the better of as a matter of business. But this ' something coming and no knowing what ' was very upsetting, and his brows knitted perplexedly as he paced to and fro, from the arch that led to the kitchen-garden to the arch that led to the front path, up which in due course Smith's boy would come whistling with the world's news and possibly something that might cast a light on his shadows. Mr Dare's business was that of an import and export merchant, chiefly with the Continent, and his offices were in St Mary Axe. He had old connections all over Europe and was affiliated with the Paris firm of Leroux and Cie, Charles Leroux having married his sister.
Download 9.2 MB PDF book