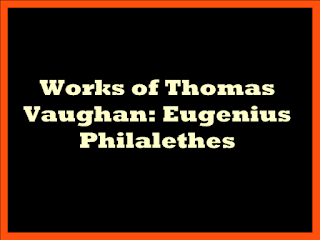 Thomas Vaughan was a Welsh clergyman, philosopher, and alchemist, who wrote in English. He is now remembered for his work in the field of natural magic
Excerpt:
This is the first volume of a series of Transactions to be issued by the Library Committee of the Theosophical Society of England and Wales.
The choice has fallen upon Thomas Vaughan for two reasons: in the first place, because of his unique position in the chain of the Hermetic tradition during the seventeenth century; and, secondly, because it has been possible to secure the services of Mr A. E. Waite, who is recognised by all students of the hidden truth as one who is particularly fitted, not only by temperament and predilection but also by special training and ripe scholarship, for the task of editing one of the profound and most difficult of all visionaries who have seen " the new East beyond the stars." The mantle of Robert Fludd may be said to have fallen upon the -shoulders of Vaughan, who in his time and generation continued the apostolate of the Secret Tradition, as this is represented by the secret and more spiritual side of alchemical philosophy.
The two writers drew from the same sources: from the school of the Kabalah in all its extensions and reflections, from the Hermetic Neo-Platonists, and from those Latin-writing scholars of Europe who, subsequent to the Renaissance, represented and not infrequently typified the struggle for liberation from the yoke and aridity of scholastic methods. Fludd was a physician, and when not dealing with cosmical philosophy he paid attention to the Hermetic foundation upon which the true art of medicine is built.
Vaughan, on the other hand, was an exponent of alchemy; and though first and foremost a mystical philosopher and a visionary, was none The Works of Thomas Vaughan the less a practical alchemist upon the material side it was, in fact, from inhaling the fumes of mercury during a chemical experiment that he met his death. Both Fludd and Vaughan were influenced by the movement known as Rosicrucian, which came into prominence in the early part of the seventeenth century. But Vaughan was an unattached interpreter, while there is ground for believing that Fludd may have been connected more or less directly with the so-called " Fratres R. C." at any rate, he was a personal friend of Michael Maier, who cannot be dissociated from the movement.
There is a living interest in Vaughan on the personal side; he belongs to the history of English literature, more especially as a prose writer, though also by the occasional felicity of his metrical exercises. Above all and this concerns the present venture more closely than any lighter consideration, he has a position of his own as an interpreter of the Secret Tradition. His works, which are valued possessions to those with sufficient knowledge to appreciate their occult significance, are here made available for the first time in a collected edition.
Download  21 MB PDF book