or, The ancient Hindu doctrine of concentration of mind, embracing the mnemonic rules, called Yoga-sutras, of Patañjali, and the comment, called Yoga-bhashya 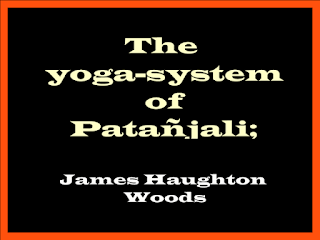 Excerpt:
The  Reasons for taking up the work. It is not without misgiving that one ventures to render into English the texts of an intricate system which have never, with the exception of the sutras, been translated in Europe or America. But the historical importance of those texts, as forming a bridge between the philosophy of ancient India and the fully developed Indian Buddhism and the religious thought of today in Eastern Asia, emboldens one to the attempt.
This system, together with the Nyaya and Vaicesika systems, when grafted upon the simple practical exhortations of primitive Buddhism, serves as an introduction to the logical and metaphysical masterpieces of the Mahayana.
Difficulties in comprehending the work. Even after a dozen readings the import of some paragraphs is not quite clear, such example as the first half of the Bhasya on iii. 14.
Still more intractable are the single technical terms, even if the general significance of the word, superficially analysed, is clear.
This irreducible residuum is unavoidable so long as one cannot feel at home in that type of emotional thinking which culminates in a supersensuous object of aesthetic contemplation.
. Difficulties of style. The Bhasya and, still more, the Tattva-vicarage are masterpieces of the philosophical style. They are far from being a loosely collected body of glosses.
Download 20 MB PDF book