The witness of the stars 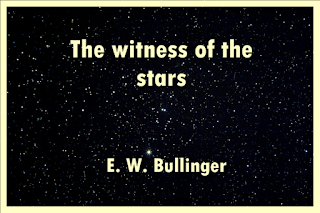 E.W, Bullinger clearly explains how these starry pictures came to be: the ancient languages used to name the stars to describe events, pictures explaining God's interventions for the benefit of mankind. Even if we didn't glean any doctrinal information from this book, we would still be enriched by his study, gaining a greater depth of understanding for the various constellations that circle our globe and fill our night skies. Bullinger's book contains a riveting story of a vast, supernatural conflict. He describes it with such enthusiasm as to be poetic in his prose. His abundant use of illustration keeps the interest of the reader and assures comprehension of his analysis.
Excerpt:
Some years ago it was my privilege to enjoy the acquaintance of Miss Frances Rolleston, of Keswick, and to carry on a correspondence with her with respect to her work, Mazzaroth: or, the Constellations. She was the first to create an interest in this important subject.
Since then Dr. Seiss, of Philadelphia, has endeavored to popularize her work on the other side of the  Atlantic; and brief references have been made to the subject in such books as Moses and Geology, by Dr. Kinns, and in Primeval Man; but it was felt, for many reasons, that it was desirable to make another effort to set forth, in a more complete form, the witness of the stars to prophetic truth, so necessary in these last days.
To the late Miss Rolleston, however, belongs the honor of collecting a mass of information bearing on this subject; but, published as it was, chiefly in the form of notes, unarranged and unindexed, it was suited only for, but was most valuable to, the student. She was who performed the drudgery of collecting the facts presented by Albumazer, the Arab astronomer to the Caliphs of Grenada, 850 A.D.; and the Tables were drawn up by Ulugh Beigh, the Tartar prince and an astronomer, about 1450 A.D., who gives the Arabian Astronomy as it had come down from the earliest times.
Modern astronomers have preserved, and still have in common use, the ancient names of over a hundred of the principal stars which have been handed down; but now these names are used merely as a convenience and without any reference to their significance.
This work is an attempt to popularize this ancient information and to use it in the interests of truth. For the ancient astronomical facts and the names, with their signification, I am, from the very nature of the case, indebted, of course, to all who have preserved, collected, and handed them down; but for their interpretation, I am alone responsible. It is for the readers to judge how far my conclusions are borne out by the evidence; and how far the foundation of our hopes of coming glory are strengthened by the prophecies which have been written in the stars of heaven, as well as in the Scriptures of truth.
Download The witness of the stars (1893) by  E. W. Bullinger PDF book 9.9 MB