The tree of life: a study of religion 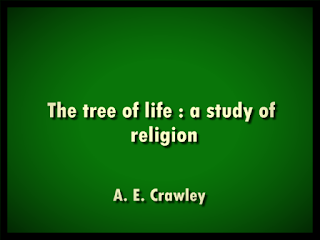 Excerpt:
It may assist the reader if I state briefly the reasons which have led to the writing of this book. In a somewhat lengthy study of primitive religion and culture, the problem of the origin of religion naturally came forward from time to time.
Before attempting the solution of such a problem, it was necessary to examine the origins and development of someone at least of the higher religions, its methods and results, its theology and its practice, from the psychological and the sociological points of view. It became increasingly clear that the problem of origin involves the problem of the function of religion.
The whole inquiry was suitably completed by an analysis of the contending forces, which have produced the present religious crisis; and here, curiously enough, maybe gathered up several clues supplied by primitive religion, and since lost sight of. I am encouraged to make the attempt at a solution of the combined problem by several considerations — the lack of unanimity in the existing theories of religion, and the vagueness as to first principles shown in the present crisis by friends and enemies of religion alike, the general interest which is now Preface being taken in these subjects, and the kind reception which has been accorded to my previous work in an allied study. But I have found my chief incentive in the new light thrown upon religious origins by the researches of Messrs. Spencer and Gillen among the natives of Central Australia.
It is not too much to say that the remarkable culture of these people is a revelation to the student of the human mind. In the confusion which still obtains on the subject of religion — both in scientific speculation and social practice — it is to be expected, as is the case, that adequate defence of religion should be wanting.
My own view of the sociological importance of religious beliefs has led me to cast this essay into such a form as may, it is hoped, supply the want. A word may be added to the title of the book. Medieval mysticism, returning to a permanent instinct, saw in the figure of Christ on the Cross an incarnation of Life in the midst of Death, the Tree of Life nailed to the Tree of Knowledge of Good and Evil. Later ages have forgotten the tradition that the Cross was made from the wood of the Tree of Knowledge, as they have forgotten the symbolism of its divine burden. They have, in more senses than one, made an error of identification, and have taken the Tree of Knowledge
Download The tree of life: a study of religion pdf book