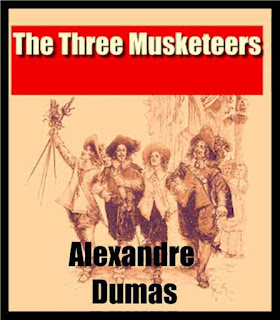 The Three Musketeers is a French historical adventure novel written in 1844 by French author Alexandre Dumas.

From the author's preface:
In which it is proved that, notwithstanding their names' ending in os and is, the heroes of the story which we are about to have the honour to relate to our readers have nothing mythological about them.

A short time ago, while making research in the Royal Library for my History of Louis XIV, I stumbled by chance upon the Memoirs of M. D'Artagnan, printed— as were most of the works of that period, in which authors could not tell the truth without the risk of a residence, more or less long, in the Bastille— at Amsterdam, by Pierre Rouge. The title attracted me; I took them home with me, with the permission of the guardian, and devoured them.
It is not my intention here to enter into an analysis of this curious work, and I shall satisfy myself by referring such of my readers as appreciate the pictures of the period in its pages.
They will therein find portraits pencilled by the hand of a master; and although these squibs may be, for the most part, traced upon the doors of barracks and the walls of cabarets, they will not find the Hkenesses of Louis XIII, Anne of Austria, Richelieu, Mazarin, and the courtiers of the period, less faithful than in the history of M. Anquetil.
But, as it is well known, what strikes the capricious mind of the poet is not always what affects the mass of readers. Now, while admiring, as others doubtless will admire, the details we have to relate, you" main preoccupation concerned a matter to which no one before ourselves had given a thought.

D'Artagnan relates that on his first visit to M. de Treville, captain of the king's Musketeers, he met in the antechamber three young men, serving in the illustrious corps into which he was soliciting the honour of being received, bearing the names of Athos, Porthos, and Aramis.
It may be easily imagined how great was our joy when, in turning over this manuscript, our last hope, we found on the twentieth page the name of Athos, on the twenty-seventh the name of Porthos, and at the thirty-first the name of Aramis.
The discovery of a completely unknown manuscript at a period in which historical science is carried to such a high degree appeared almost miraculous.
We hastened, therefore, to obtain permission to print it, with the view of presenting ourselves someday with the pack of others at the doors of the Academic des Inscriptions et Belles Lettres, if we should not succeed— a very probable thing, by the by— in gaining admission to the Academie Francaise with our own proper pack.
This permission, we feel bound to say, was graciously granted; which compels us here to give a public contradiction to the slanderers who pretend that we live under a government but moderately.
the book details : Download The Three Musketeers - Alexandre Dumas - 15 MB