The test of scarlet, a romance of reality 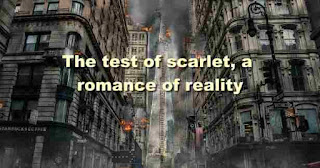 A narrative picture of the last days of the war. It is announced by the publishers as a novel.

The form is descriptive narrative, following the action of one battery and detailing the sensations of the officer who tells his own story.
The book falls into three parts: The indignity of not dying; The march to conquest; Into the blue. The work was first copyrighted by the International magazine company.

"It is, of course, intensely interesting, written in a clear and vivid style which makes us feel as though we were seeing it all. Mr. Dawson minimizes nothing of the pain and the horror, the filth and the agony of war, yet when the book is finished one's predominating feeling is that of reverence." - N Y Times

"The mind and soul, the strength and weakness, of the individual soldier, are indicated with deep feeling and true literary art." - Outlook