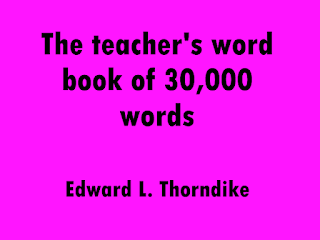 Excerpt:
This book is a greatly improved extension of the Thorndike Teacher's Word Book, published in 1921, and of the extension of it to include 20,000 words published in 1931. It includes the data of these two counts and also of three other counts of over a million words each. It enables a teacher to know not only the general importance of each word so far as frequency of occurrence measures that, but also its importance in current popular reading for adults, as shown by the Lorge magazine count, and its importance in such juvenile reading as schools and libraries approve.
This extension would not have been possible except for the work of Dr Irving Lorge on the Lorge-Thomdike semantic count and the Lorge magazine count, and for his generosity in permitting me to use the results. I have also had the benefit of his advice on the general plan.
But he is not responsible for the execution of it, or for any errors in the copying of records or the computations. Certain exercises of judgment have been necessary because the recorders of the magazine count began all words with capital letters, and because the recorders of the semantic count did not record contractions like isn't, and did not separate different forms of words like he, come, and do, and because the count of juvenile books did not include the top 2,500 of the Thorndike general count. The original Thorndike count failed to record abbreviations adequately, and it is likely the recorders in the other counts skipped many.
This book is not final as a frequency count of English reading. New words will become important. Scientific and another erudite reading matter deserves a separate column, though it has its fair proportion of weight in the original Thorndike count and in the se¬ mantic count. A column for the vocabulary of modem fiction, or for new war terms, might be useful. It will be easy for future workers to extend and amend this book by adding counts of 234> or 4^, or 6%, or 9 million words of any sort.
Contents:
PART I. List of Words Occurring at Least Once per 1,000,000 Words . . 1
PART II. List of Words Occurring at Least Once per 4,000,000 Words But
Not So Often as Once per 1,000,000 Words.211
PART III. Explanatory Notes, Descriptions, and References to Descriptions,
of the Four Word Counts.249
PART IV. The Number of Occurrences (in the Lorge Magazine Count and the Lorge-Thorndike Semantic Count) of Words Occurring 1,000 or More Times in Either of These Counts.259
PART V. List of the 500 Words Occurring Most Frequently and of the 500
Words Occurring Next Most Frequently.267
Download