The sexual crisis; a critique of our sex life. Authorized translation by Eden and Cedar Paul, with an Introduction  by William J. Robinson 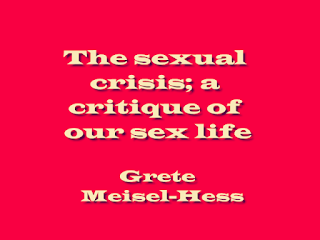 Excerpt from the introduction:
There is too little joy in this world, too little happiness. Sadness and misery are the common lots. They are so common, that by millions of people they are considered the natural condition, the inevitable fate of the human race. "Yes, I am weary/' says Humanity; ' ' the cup of my misery is full to overflowing, ' ' and then it proceeds to drink from the cup and continues to carry its burden, sometimes with but generally without a murmur.
Fortunately for the race, it always had some sons and recently also some daughters who rebelled against the idea that suffering, pain and unhappiness were inevitable conditions to be borne without a struggle.
They rebelled, they fought, they died in the cause,- but they blazed a trail which makes it easier for us to continue the work. The first condition necessary to cure a disease is to know its cause and its character.
The first step in removing human misery is an analysis of its causes. It did not require much acumen to discover that our economic order was responsible for a large proportion of human suffering; the discovery that our sex life, our code of sex morality, was the cause of an enormous amount of suffering of the acutest, the most agonizing character, came at a much later date; we may say it is the discovery of but yesterday. But the unbiased modern thinker, the close observer who has considerable material on which to make his observations, must inevitably come to the conclusion that sex misery is as widespread as is hunger misery and is much more difficult to handle. In other words, it is much more difficult to solve the sex problem than it is the economic problem.
There are several reasons for this. One of the reasons is that economic misery is open, sexual misery is hidden. People in the mass do not conceal their economic condition; they are not ashamed of their economic status; some are even ready to exaggerate their poverty, and many do not hesitate to apply for charitable relief. Sexual misery, however, is hidden in the deepest recesses of the heart. like the Spartan youth with the fox at his breast, many a man has gone down to his grave with sex misery gnawing at his vitals, without flinching, and many women will let their health wither and their vitality shrivels, and will not betray their secret.
Another reason is that it is easier and simpler to relieve bread poverty than it is sex poverty. When a man is starving, we can give him dinner, a dollar, or a job. When a person is dying for the lack of love, we cannot offer him the requisite remedy. There are free bread-lines and municipal lodging houses for those who need bread and shelter; no such palliatives have been provided for the sexually starved. A third reason is that the satisfaction of our other instincts hunger, thirst and sleep is a legitimate function and does not conflict with any religious code; the satisfaction of the sex instinct, except under certain prescribed conditions, which for millions of adult men and women are unattainable, is considered a vice or a crime, because it conflicts with religious dogma, with the statute law and with the man-made code of morality. A fourth reason: when a man is poor he knows it. In other words, one who suffers from a lack of material necessities knows exactly what his trouble is: one who suffers sexually does not himself always know what the trouble is. A man or a woman suffering from lack of love or from lack of sexual satisfaction (the two are not synonymous) or from improper sexual satisfaction may be deeply unhappy and not suspect the cause of the unhappiness. It may require the prolonged efforts of an acute psychologist to determine the cause and to point it out to the sufferer.
Download 16 MB PDF book