The philosophy of Friedrich Nietzsche 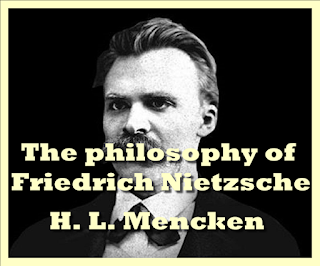 The philosophy of Friedrich Nietzsche and the music (and quasi-music) of Richard Strauss: herein we have our modern substitutes for Shakespeare and the musical glasses.
There is no escaping Nietzsche. You may hold him hissing and a mocking and lift your virtuous skirts as you pass him by, but his roar is in your ears and his blasphemies sink into your mind. He has coloured the thought and literature, the speculation and theorizing, the politics and superstition of the time. He reigns as king in the German universities where, since Luther's day, all the world's most painful thinking has been done and his echoes tinkle, harshly or faintly, from Chicago to Mesopotamia. His ideas appear in the writings of men as unlike Roosevelt and Bernard Shaw; even the newspapers are aware of him.
He is praised and berated, accepted and denounced, canonized and damned. Pythagoras had no more devout disciples and Spinoza had no more murderous and violent foes. Wherefore it may be a toil of some profit to examine his ideas a bit closely; to differentiate between what he said in his books and what his apostles and interpreters and enemies say or think he said; and in the end, perhaps, to find out what he meant.
Despite the notion of those who know him but by name or ill-fame, there is nothing cryptic or mysterious about Nietzsche. His ideas are ever clear. Curiously enough, the popular comprehension of his philosophy suffers by this very fact, for the world has come to regard the metaphysic as something properly and necessarily occult and to expect its expounders, if they would seem truly wise, to show the abysmal turgidity of a Kant and the wild, cabalistic imbecility of Revelations.
When there arises a prophet like Nietzsche, who thinks his thoughts accurately and puts them into the vulgar tongue, he is commonly suspected to be some sort of fantastic and preposterous joker. Instead of accepting his prophecy in its surface sense, his audience sees, in its very obviousness, a new and extraordinarily confusing form of a riddle. Such is the curse that Rabbinism, in and out of the church, has laid upon the propagation of ideas. Nietzsche's literalness is the hallmark of his entire philosophy. He is the high priest of the actual, and the divine mysteries seem to him to be but so many grotesque lunacies. Stripping an idea of its holiness and romance, its antiquity and authority, he burrows down into the heart of it and tries to estimate it in terms of its actual probability and reasonableness. That a thing is sacred or venerable or ancient or beautiful does not interest him.
The question is asked invariably, Is it true? If he concludes that it is not, he says so, and if it happens to be something that is regarded with unusual reverence by the majority of men which means something whose inviolability is accepted without inquiry or the shadow of a doubt he says so with unusual heat and x clamour. He is, indeed, the king of all axiom smashers and the arch dissenter of the age. To him, such words as good and godly have no meaning whatever.
He regards them as mere scarecrows and bugaboos, invented and employed by sophists and doctrinaires to ward off that free inquiry which would put their fallacies to rout. Reduced to elementals, Nietzsche's philosophy consists of the following propositions:
1. That the ever-dominant and only inherent impulse in all living beings, including man, is the will to remain alive the will, that is, to attain power over those forces which make life difficult or impossible.
2. That all schemes of morality are nothing more than efforts to put into permanent codes the expedients found useful by some given race in the course of its successful endeavours to remain alive.
3. That, despite the universal tendency to give these codes authority by crediting them to some god, they are essentially man-made and mutable, and so change, or should change, as the conditions of human existence in the world are modified.
4. That the human race should endeavour to make its mastery over its environment more and more certain, and that it is its destiny, therefore, to widen more and more the gap which now separates it from the lower races of animals.
5. That any code of morality which retains its perma- nice and authority after the conditions of existence which gave rise to it have changed, works against this upward progress of mankind toward greater and greater efficiency.
6.That all gods and religions, because they have for their main object the protection of moral codes against change, are inimitable to the life and well-being of healthy and efficient men.
7. That all the ideas which grow out of such gods and religions such, for example, as the Christian ideas of humility, of self-sacrifice and of brotherhood are enemies of life, too.
8. That human beings of the ruling, the efficient class should reject all gods and religions, and with them the morality at the bottom of them and the ideas which grow out of them, and restore to its ancient kingship that primal instinct which enables every efficient individual to differentiate between the things which are beneficial to him and the things which are harmful.
Download The philosophy of Friedrich Nietzsche (1908) by H. L. Mencken PDF book 12 MB