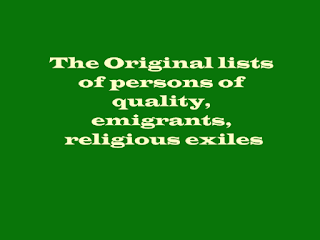 The original lists of persons of quality, emigrants, religious exiles, political rebels, serving men sold for a term of years, apprentices, children stolen, maidens pressed, and others who went from Great Britain to the American plantations, 1600-1700: with their ages, the localities where they formerly lived in the mother country, the names of the ships in which they embarked, and other interesting particulars, from mss. preserved in the State Paper Department of Her Majesty's Public Record Office, England
Excerpt:
Of the history of the Colonies, and the eventual establishment of Independence, I have nothing to say. My object is simply and briefly to point out some of the causes which contributed to the early emigration of English families to America, and then to estimate the practical value of the contents of the present volume as a means of assistance in making genealogical researches in the mother country. One of the earliest acts of Charles the First, — an act which raised a storm of indignation throughout the country, — was the imposition of. forced loan without the grant of Parliament.
The manner in which this unconstitutional measure was treated by those called upon to contribute towards the assessment, is well illustrated by the events which took place in Lincolnshire; and a relation of the part taken by the leading men of that locality, some of whom were related to, or intimately associated with, the principal agents in the subsequent emigration to Massachusetts, under John Winthrop, in 1630, will be of some interest to the descendants of the New England emigrants. One of the richest men in the county of Lincoln, who strenuously opposed the forced loan, v/as Isaac Johnson, who, as is well known, married the Lady Arabella, sister to Theophilus, Earl of Lincoln, who himself married a sister of the Lord Say and Sele. These two noblemen took a very active part in denouncing the loan as dangerous and unconstitutional. Lord Say and Sele, who, during the civil war, some years later, commanded a Parliamentarian I'egiment, openly asserted that he would rather lose half his estate than risk the impoverishment of his posterity by the establishment of so dangerous a precedent as a loan without the sanction of Parliament.
But Lord Lincoln's opposition to the loan was more immediately productive of dissatisfaction. As soon as it was proposed he took upon himself to have an Abridgment of the Statutes prepared for distribution; and it is not unlikely that in the compilation of this document he was aided by his former steward, Thomas Dudley,
Download