The mystic rose: a study of primitive marriage 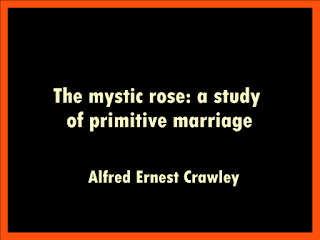 The present theory was outlined about seven years ago, and a preliminary portion was published in the Journal of the Anthropological Institute for 1895 (vol. xxiv.). In that paper, the main lines of the argument were laid down, and it was suggested that the explanation of marriage ceremonies and systems was to be developed thereon.
The subsequent loss of a good deal of my materials, not yet all recovered, has been balanced by the publication of Messrs. Spencer and Gillen's valuable researches amongst the Central Australian natives, which confirm my conclusions in many ways.
These conclusions were originally completed without reference to the prevalent doctrines, originated by Bachofen and McLennan, and developed by Morgan, Bastian, Lubbock, G. A. Wilken, Robertson Smith, Giraud-Teulon, Fison, Howitt, Tylor, Post, Lippert, and others, concerning the origin and development of marriage, such as the Matriarchate (Bachofen), Marriage by Capture (McLennan), Primitive Promiscuity and Communal Marriage, comprising the hypotheses that some marriage ceremonies are intended to make the husband and wife of the same tribal or blood - kinship, and that others are " expiation for marriage" (Sir J. Lubbock); that is to say, these ceremonies are compensation to the tribe or kin, individual marriage being an infringement of communal rights.
These theories had to be taken into consideration. A previous study of the psychology of the lower races, starting from Professor Tylor's Primitive Culture, and Dr. Frazer's Golden Bough, to both of which I owe a great intellectual debt, made it evident that these prevalent theories of marriage origins were based on an imperfect understanding of primitive custom and thought.
It also appeared a mistake, in view of the undifferentiated character of early thought, to separate the study of marriage systems and marriage ceremonies.
I have here attempted to supply a more adequate basis for the inquiry by an analysis of the simplest and most elemental aspects in which the individual appears in relation to society.
The ultimate appeal in these questions is to universal facts of human physiology and psychology.
In the illustration, it is perhaps worth mentioning that I was led from a general study of primitive culture to the study of marriage, by an investigation into the curious custom of exchange of dress between men and women, which occurs in the most dissimilar connections and the strangest places.

SEXUAL TABOO
Man and woman Sexual taboo Solidarity of sex Antagonism
of sex Sex in religion Influence of sex upon language
Sexual taboos on names Sex and occupations Sexual taboo
in social life and at sexual crises Preliminary analysis of
sexual taboo ..... pp. 33 58
CHAPTER IV
HUMAN RELATIONS
Evil spirits and material evil influences not distinguished Anthro-polymorphism Possession Personification The real and the ideal not distinguished The memory-image Human and
spiritual influence not distinguished Human influence under-
lies spiritual, in social and sexual relations. pp. 59 75
CHAPTER V
HUMAN RELATIONS
Contact the test of human relations, both social and sexual Substance and accidents Material transmission of states and properties Basis of social and sexual taboo Contagion of
various human qualities and states Sin and death are contagious Destruction of property Death and evil
conducted by the soil Human properties transmitted
Cannibalism Transmission of qualities by means of flesh and
blood, various parts of the body, functional emanations,
garments, food, milk, and by various forms of contact, stepping
over or walking around a person, by the touch, shadow, sight,
and mere proximity The intention Transmission of ill-will
and of love Oaths Magic use of anything that has been in
connection with a person . . . pp. 76 132
CHAPTER VI
HUMAN RELATIONS
Care of functions and organs The mutilation of organs Disgust,
uncleanness, and shame in connection with social and
sexual taboo Summary of the conceptions which underlie
human relations Their result in primitive morality and
etiquette ..... pp. 133 147
Alfred Ernest Crawley was an English schoolmaster, sexologist, anthropologist,
Download The mystic rose: a study of primitive marriage 19.7 MB PDF book