The moral obligation to be intelligent, and other essays 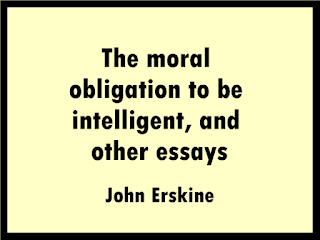 Collection of Essays:
The moral obligation to be intelligent.--The call to service.--The mind of Shakspere.--Magic and wonder in literature
Excerpt:
If a wise man should ask. What are the modern virtues? and should answer his own question by a summary of the things we admire; if he should discard as irrelevant the ideals which by tradition we profess, but which are not found outside of the tradition or the profession — ^ideals like meekness, humility, the renunciation of this world; if he should include only those excellences to which our hearts are daily given, and by which our conduct is motived, — in such an inventory what virtues would he name?
This question is neither original nor very new. Our times await the reckon- ing up of our spiritual goods which is here suggested. We have at least this wisdom, that many of us are curious to know just what our virtues are. I wish I could offer myself as the wise man who brings the answer. But I raise this question merely to ask another — When the wise man brings his list of our genuine admirations, will intelligence be one of them?
We might seem to be well within the old ideal of modesty if we claimed the virtue of intelligence. But before we claim the virtue, are we convinced that it is a virtue, not a peril? II The disposition to consider intelligence a peril is an old Anglo-Saxon inheritance. Our ancestors have celebrated this disposition in verse and prose. Splendid as our literature is, it has not voiced all the aspirations of humanity, nor could it be expected to voice an aspiration that has not characteristically belonged, to the English race; the praise of intelligence is not one of its characteristic glories.
John Erskine was an American educator and author, pianist and composer. He was an English professor at Amherst College from 1903 to 1909, followed by Columbia University from 1909 to 1937. He was the first president of the Juilliard School of Music.
Download