The marks of an educated man 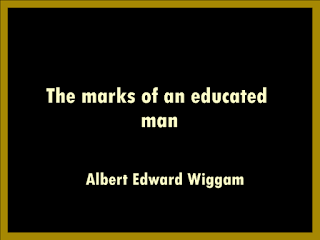 The advances in the science and philosophy of education during the past generation are among the most heartening signs of genuine human progress. But my hope here is simply to make education appear worthwhile, attractive and attainable to the humblest man.
I am convinced that, without any increase in our natural abilities we could all be much better educated than we are and consequently much happier and more useful. I wish I might make education seem, as Matthew Arnold said of culture, “a disinterested endeavour after perfection,’ ’ — an endeavour that is not a “having” or a “being” but an eternal “becoming,” an eternal becoming something finer, better, happier and more useful; an endeavour that never ceases, an endeavour that loses all its power if it fails for a moment to be disinterested, that loses all its beauty if it is for a less ideal than perfection. And I hope I shall convince the reader that perfection as some state of unchanging bliss is not only im- possible but undesirable, but that, by man’s very nature, the going toward it, the striving for it, the adventure, the excitement, the romance of the search is the very perfection that he seeks.
The Holy Grail is unattainable and would bring no joy if it were found. To become perfectly educated, therefore, is impossible, but to try to become educated is education — as nearly perfect education as one can have.
The experimenters have of course discovered that some ways of striving produce much greater results in learning, achievement and power than other ways; but after all, educational effort, the inner striving “to comprehend the beauty and wonder of the world/ ’ and to enrich this beauty and wonder with the flood and glow and passion of your own personality — this is the thing to which men have given the magic name of education.
Albert Edward Wiggam was an American psychologist and eugenicist. He was called "one of the most influential promoters of eugenic thought" and a "gifted showman," which made him a popular lecture
Download PDF book 18 MB