The law of mentalism pdf book 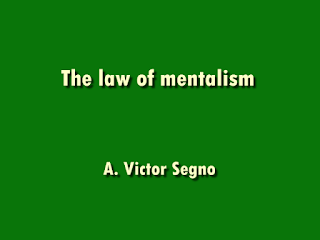 The law of mentalism: a practical, scientific explanation of thought or mind force: the law which governs all mental and physical action and phenomena: the cause of life and death.
In acquiring the information contained in this book, I lay in. claim to have possessed knowledge or power superior to that possessed by many other persons. I simply claim that after many years of close, conscientious stud}-, to have touched a chord in Nature that responded and revealed to me the law which governs all intelligence, life and the change called death.
After thoroughly testing this great power, I have decided to give the knowledge to the world. I do so with the full conviction that it will Unionize, to a more or less degree, the life of every person who reads it. I intentionally avoided the use of scientific terms in this book, for it was written for the people as a whole, and not simply as a scientific text, but have held st the knowledge that has been thoroughly tested and demonstrated to the entire satisfaction of logical, thinking minds, because I wish to appeal only to the reason and intelligence in man. I believe that there is one great source of all intelligence called "God;" that the mental and spiritual (mind and soul) are as one in Him and in us; that intelligence has always existed and always will exist.
That we are all entitled to share alike in this great gift, and that we each gain all the knowledge we rightly seek and work for. That we are slaves or masters as a result of our ignorance or our choice. That man has created a free and independent being, and that he is bound in slavery only through his ignorance of the source of intelligence and the laws that govern life. That we can make or mar our careers upon this earth and in the life to come, and that it remains entirely with us to decide.
Download PDF book