The influence of the gold supply on prices and profits 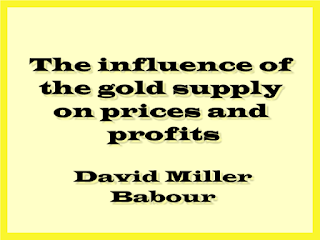 Excerpt:
The increase in the yearly production of Gold and the rise in prices which have occurred in recent years has led to a renewal of the controversy as to the influence of Money on Prices. One party to this controversy holds that, under modern conditions, the Quantity of Money has a very slight and negligible influence on Prices, which are mainly determined by Credit. Their opponents hold that the Quantity of Money has a substantial influence on Prices, and assert that, other things being equal, the general level of Prices is determined by the Quantity of Money: ” they admit that during any portion of time which may be chosen the '' other things ” which are assumed to be equal in the statement of the Quantity Theory may vary in such manner as to exercise a material influence on Prices.
Sir David Miller Barbour KCMG was a senior administrator in India, Finance Member of the Indian Viceroy's Council under Henry Petty-Fitzmaurice, 5th Marquess of Lansdowne, writer on monetary issues, and Irish loyalist. From 1903 to 1905 he was chairman of the Royal Commission on London Traffic.
Download