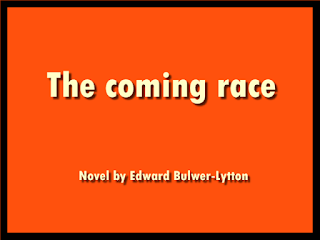 The coming race novel centres on a young, independent, unnamed, wealthy traveller (the narrator), who visits a friend, a mining engineer. They explore a natural chasm in a mine that has been exposed by an exploratory shaft. The narrator reaches the bottom of the chasm safely, but the rope breaks and his friend is killed.
The narrator finds his way into a subterranean world occupied by beings who seem to resemble angels. He befriends the first being he meets, who guides him around a city that is reminiscent of ancient Egyptian architecture.
The explorer meets his host's wife, two sons and daughter who learn to speak English by way of a makeshift dictionary during which the narrator unconsciously teaches them the language. His guide comes towards him, and he and his daughter, Zee, explain who they are and how they function.
Download