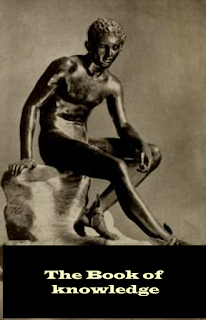 The Book of Knowledge was an encyclopedia aimed at juveniles first published in 1912, by the Grolier Society. Originally largely a reprint of the British Children's Encyclopaedia with revisions related to the United States by Holland Thompson, over time the encyclopedia evolved into a new entity entirely.
It was published under a policy of continuous revision, meaning that there were no separate editions, but annual printings that were edited and updated by the publisher. Thompson remained editor until his death in 1940. From 1941 to 1960 it was edited by Ellen V. McLaughlin and from 1960 to 1966 by John D. Tedford. In 1966 it was replaced by the New Book of Knowledge.
SOME CONTENTS OF THIS VOLUME
This is a short guide only to the principal contents of this volume. It is not possible to give the titles of all the Poems and Rhymes, Legends, Problems, colour pages, questions in the Wonder Book, and many other things that come into the volume; but in all cases, the pages where these parts of our book begin are given. The full list of these things comes into the big index of the whole work.