Success and its conditions (1899) PDF book by Edwin Percy Whipple 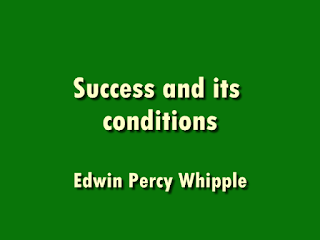 The Essays in this volume were written at various periods during the past twenty-five years. In collecting them, the author finds that they more or less refer to the conditions of success, in the various departments of life; and he has ac cordingly given this title to the book. The lead ing idea is, that nothing really succeeds which is not based on reality; that sham, in a large sense, is never successful; that in the life of the individ ual, as in the more comprehensive life of the state, pretension is nothing and power is everything
It is universally admitted that " truth is mighty and will prevail." The writer has tried to illustrate a less familiar maxim, that truth is mighty and has prevailed. Abstract truth, entirely disconnected from human life and the substance of human char acter, is doubtless something for the realization of which we must look to the future; relative truth, the truth which inheres in things and persons, and. which continually tests pretension by performance, prevails from day to day, and is the vital force that impels the world forward.
We are so abundantly supplied with the commonplaces of perfection, that we are tempted to forget the imperfections of human beings. In the Essays on " Young Men in History," " The Vital and the Mechanical," "Grit," "Shoddy," "The Ethics of Popularity," " Mental and Moral Pauperism," not to mention others, the author has attempted to state the vital conditions of success, that is, the truth which really prevails.
With the tenderest regard for ideals, he has desired to discriminate between their assertion and their realization.
Possibly his statements, in some cases, may have the extravagance and injustice of epigram; but he still trusts that the idea may be perceived through all the exaggerated modes of its expression. Dis believing in truisms, he would most emphatically profess his belief in truths; and he hopes that, in urging every argument and illustration against "the madness of extremes," in inculcating the principles of vital moderation, he has said nothing which should offend any true reformer and philanthropist.
Contents:
Young men in history -- The ethics of popularity -- Grit -- The vital and the mechanical -- The economy of invective -- The sale of souls -- The tricks of imagination -- Cheerfulness -- Mental and moral pauperism -- The genius of Dickens -- Shoddy -- John A. Andrew
Download