Semitic Magic: its origins and development 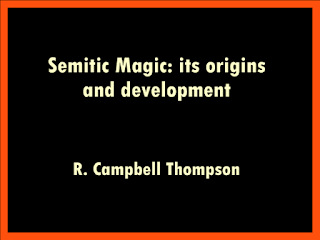 Excerpt:
The theories put forward or maintained in this book are based on a study of that intricate demonology that has gradually developed throughout the lands of Western Asia.
The earliest written records of this magic are found in the cuneiform incantation tablets from Assyria; and, aided by the various stepping- stones afforded by Rabbinic tradition, Syriac monkish writings, and Arabic tales, we can trace its growth and decadence through three thousand years down to its survival in modern Oriental superstition. Furthermore, the parallels afforded by Aryan and Hamitic nations show how close the grooves are in which savage ideas run, and that the principles of magic are, broadly speaking, coincident in each separate nation, and yet, as far as we know, of independent invention. All these superstitions combine to throw light on many of the peculiar customs of the Old Testament and help to explain the hidden reason why these customs existed. From a study of the characteristics of the evil spirits, which the Semite believed to exist everywhere, certain deductions can be made which bear intimately on our knowledge of the origins of certain tabus and the principle of atonement.
These may be briefly stated thus:
(1) All evil spirits could inflict bodily hurt on man.
(2) The relations between spirits and human beings were so close that both semi-divine and semi-demoniac offspring could be born of intermarriage between them, either of human mothers or fathers.
(3) From this belief in intermarriage with spirits arose the tabus on certain sexual functions. These (according to the present theory) indicate the advent, proximity, or presence of marriageable demons who would tolerate no meddling in their amours. Hence the tribesman, fearing their jealousy, segregated the contaminated person from the rest of the tribe for such time as he deemed expedient.
(4) It frequently happened that, in spite of the care taken to isolate all persons or things tabu, a man might break an ' unwitting ' tabu, and as a result would fall sick from the attack of a resentful spirit. The priest was then called in to exorcise the demon, which he was able to do by a transference of the demoniac influence from the body of his patient into some other object.
(5) This is the base of the atonement principle. The priest first of all inveigled or drove out the demon from the sick man into a wax figure or slaughtered kid, and he was then able to destroy it. As civilisation proceeded, the most probable theory is that the original idea of the slaughtered kid became merged in that of the ordinary sacrifice representing a common meal with the god. The carcase of the kid then played the part of a ' sin-offering ' in the sense in which it is now understood, instead of being a receptacle for the demon cozened forth from the patient.
(6) Having proceeded thus far, the principle of substitution for the firstborn demands attention. This apparently takes its origin in primitive cannibal feasts, the horror of which was softened as the Semites advanced in progress. With their migration perhaps to a more fertile land where the stress of poverty and famine did not demand such extremities as cannibalism, and also from a contemporaneous rise in civilisation, it became natural to substitute a beast for a tribesman at the tribal sacrificial feasts.
The study of tabu from the Assyrian side has been comparatively neglected, and yet the evidence hitherto gleaned from the cuneiform writings shows that it existed in practically the same forms in Mesopotamia as in other countries. I had hoped to find more proof of its presence in certain cuneiform tablets dealing with medical and kindred subjects in the British Museum, but my two applications for permission to copy un- published tablets of this nature were refused by the Museum authorities. Hence the material at hand for a study of a most interesting branch of Comparative Religion is more imperfect than I could have wished, and the relative scientific value of what we actually know on this subject is proportionate to the amount of evidence which may be afforded at some later date by these privy documents.
Reginald Campbell Thompson (21 August 1876 – 23 May 1941) was a British archaeologist, assyriologist, and cuneiformist. He excavated at Nineveh, Ur, Nebo and Carchemish among many other sites.
Download 17 MB PDF book