Scientific sales management; a practical application of the principles of scientific management to selling. 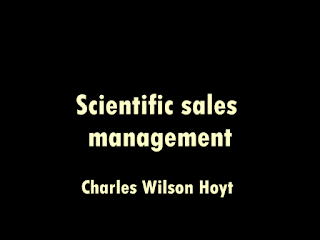 A few days ago when Mr Hoy t told me that he had written a book on Scientific Sales Management, I congratulated him. At the same time, I said that those who had occasion to spend money m sales work were to be congratulated also. During the years I have known Mr Hoyt, I have more and more admired his work. Our first meeting was purely on a business basis, but he quickly made our connections stronger by the excellence of his methods. In his experience,
Mr Hoyt has had the happiest combination which has made him the really big advertising and sales director that he is. First, he was given the benefit of scientific engineering training at a great university (Yale, 1894, S.S.S.). That probably made him the accurate, keen analyst that he is. He analyzes, reasons, and deduces in a clear-cut way. His mathematical training has made him exact. Then he did what seems strange for a university-trained man — what really made him the power that he is. He went from the University out on the road as a travelling salesman. It was no elementary short cut that he took. From 1894 until 1909 — fifteen years — he worked in a practical way on every phase of selling and, in the later years, on advertising also. So in 1909 he merely broadened his field when he engaged in business as a consulting sales and advertising manager. As a preliminary training, he had worked as a travelling sale
sman two years before entering college and then fifteen years after graduating.
Two years ago he came to me to help in marketing the Maxim Gun Silencer. Never have I seen him reach a wrong conclusion. Never has he offered advice that was not good. From his rich fund of experience, he has helped me solve problems that I, with my own training and experience, could not have solved without costly experimenting. I am glad of the opportunity to write these few words which may induce the man who employs or directs salesmen to read Mr Hoyt's book. The reader of this book has an opportunity to see in part and to profit from the accumulated results of twenty years of sales and advertising experience. You lose the benefit of the personal contact which I have enjoyed, but you will be well repaid by a perusal of the book.
Download