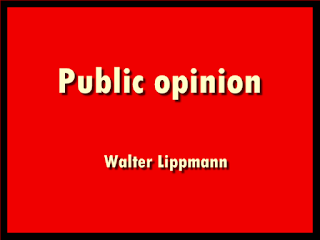 Contents :
Introduction.--Approaches to the world outside.--Stereotypes.--Interests.--The making of a common will.--The image of democracy.--Newspapers.--Organized intelligence.
Walter Lippmann was an American writer, reporter and political commentator. With a career spanning 60 years, he is famous for being among the first to introduce the concept of the Cold War, coining the term.
Excerpt from the introduction:
There is an island in the ocean wherein 1914 a few Englishmen, Frenchmen, and Germans lived. No cable reaches that island, and the British mail steamer comes but once in sixty days. In September it had not yet come, and the islanders were still talking about the latest newspaper which told about the approaching trial of Madame Caillaux for the shooting of Gaston Calmette. It was, therefore, with more than usual eagerness that the whole colony assembled at the quay on a day in mid-September to hear from the captain what the verdict had been.
They learned that for over six weeks now those of them who were English and those of them who were French had been fighting on behalf of the sanctity of treaties against those of them who were Germans. For six strange weeks, they had acted as if they were friends, when in fact they were enemies. But their plight was not so different from that of most of the population of Europe.
They had been mistaken for six weeks, on the continent the interval may have been only six days or six hours. There was an interval. There was a moment when the picture of Europe on which men were conducting their business, as usual, did not in any way correspond to the Europe which was about to make a jumble of their lives. There was a time for each man when he was still adjusted to an environment that no longer existed.
All over the world as late as July 25th men were making goods that they would not be able to ship, buying goods they would not be able to import, careers were being planned, enterprises contemplated, hopes and expectations entertained, all in the belief that the world as known was the world as it was. Men were writing books describing that world. They trusted the picture in their heads. And then over four years later, on a Thursday morning, came the news of an armistice, and people gave vent to their unutterable relief that the slaughter was over.
Yet in the five days before the real armistice came, though the end of the war had been celebrated, several thousand young men died on the battlefields. Looking back we can see how indirectly we know the environment in which nevertheless we live. We can see that the news of it comes to us now fast, now slowly; but that whatever we believe to be a true picture, we treat it as if it were the environment itself. It is harder to remember that about the beliefs upon which we are now acting, but in respect to other peoples and other ages, we flatter ourselves that it is easy to see when they were in deadly earnest about ludicrous pictures of the world. We insist, because of our superior hindsight, that the world as they needed to know it, and the world as they did know it, were often two quite contradictory things. We can see, too, that while they governed and fought, traded and reformed in the world as they imagined it to be, they produced results, or failed to produce any, in the world as it was.
They started for the Indies and found America. They diagnosed evil and hanged old women. They thought they could grow rich by always selling and never buying. A caliph, obeying what he conceived to be the Will of Allah, burned the library at Alexandria.
Download