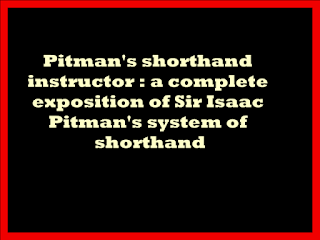 This book is one of the easiest books to learn Shorthand for more about Shorthand Visit Wikipedia
The system of shorthand writing presented in the following pages was invented by Sir Isaac Pitman, who in 1837 published his first treatise on the art.
In 1840 the second edition of his work appeared, under the title “ Phonography, or Writing by Sound is also a New and Natural System of Shorthand In the numerous editions of Phonography published in succeeding years, many improvements were introduced.
These were the fruit of long and varied stenographic experiments, and of the valuable criticism and experience of large numbers of expert writers of the system who had applied it to work of every description.
No other system of shorthand designed for the English language has been subjected to tests so prolonged, so diverse, and so severe as those which Pitman's Shorthand — as the system is now generally styled — has undergone during the last eighty- six years, with the result that it has been most successfully adapted to the practical requirements of all classes of shorthand writers.
The present edition includes a few alterations that have been made to certain rules of the system. The effect of these alterations is to simplify the work of the student without in any way interfering with the wonderful power of the system in the hands of the expert writer. The object specially borne in mind in preparing the work has been to render it equally suitable for self -tuition and for individual or class instruction under a teacher. No effort has been spared to explain and illustrate the rules in the clearest and simplest manner possible.