Paper, its history, sources, and manufacture 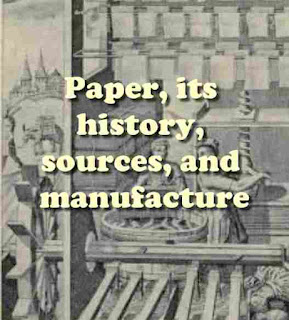 The purpose of this work is to place within the reach of those interested a sufficiently comprehensive technical handbook on Paper and Paper-making at a price that will render it available to those whose opportunity of purchasing the more ambitious publications is limited.
While primarily written for those concerned in making, handling, or using paper, it has been the author's endeavour throughout to arrange and modify the language in order to render the subject intelligible to the general reader, whose knowledge of technical or trade terms and formulae is naturally of lesser degree.
survey the history of paper-making, it is necessary to go back some thousands of years to the time when the records of the nations were maintained in the monumental form of carvings on rock and stone. Of these, the earliest traces known are those of the early Persians, dated from eight to ten thousand years B.C. Later, stones, slabs, brass, bronze, and ivory plates constituted the medium by which man communicated to man his thoughts, records, and writings.
A further link in the chain of transition from rocky cliffs to paper fabric comprises the beeswaxed board to which the early Egyptians transmitted their records by incision with the stylus. The incisions were afterwards filled in with earthy colour for distinction and endurance. Plain wood tablets were also used, the writing being^ performed in ink, or with charcoal, on a chalked surface.
About the period 4000 B.C., tile and clay tablets/ cylinders, and cones were employed as writing material by the Assyrians and Chaldeans. Many of these records have been discovered by excavating parties in recent times, particularly in the pyramids.
The characters were impressed on the clay whilst plastic, after which the clay was sun-dried or baked in an oven. At a still later period, reptile and animal skins, / cured and prepared on one side only, were put to use \as writing material, but these speedily gave way upon the introduction of papyrus and parchment, which may be regarded as the direct forerunners of paper proper^ Papyrus, or Biblos, as it was variously termed, was a material used by the Egyptians and early Greeks. Many religious, official, and domestic documents on papyrus are still in existence which is assigned to dates ranging to 2000 years B.C.
The earliest date to which papyrus can at present be traced is said to be that of a document containing accounts from the reign of Assa, an Egyptian monarch (3580-3536 B.C.). The age of this relic is claimed to be 3600 B.C. As a writing material, papyrus was employed down to the middle of the tenth century of our own era. The papyrus grew abundantly on the marshy land in the regions of the Nile, as a tall plant with a triangular stem and long sharp leaves. The ancient method of making the papyrus sheets or rolls were as follows: the pith from inside the stem of the plant was cut into thin long strips, which were laid side by side. These were made to the required size and gummed over with an adhesive, originally believed to consist of a viscous solution obtained from the River Nile, but now held to have been some form of prepared agglutinant. However uncertain this may be as regards the Egyptian method, it is certain that the Romans used flour in the later manufacture of their highest quality papyrus.