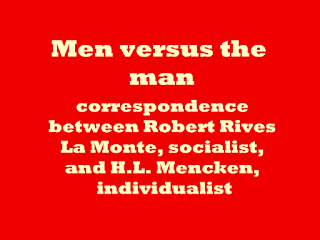 This book is precisely what it pretends to be: a series of letters between friends. They were written because the general subject of the organization of society was one which vastly attracted both of us and because a space of three hundred miles made a more intimate discussion impossible. Into them, there went, not so much a learned review of the evidence and the prophets, as a record of personal, and often transient opinions and impressions. Changes of position are to be noticed in more than one place, but inasmuch as the purpose of each disputant was to shake the stand of the other, this proof of occasional success may be accepted, it is hoped, without impatience. It was thought best to print the letters without attempting to transform their epistolary freedom into a more sedate dialectic manner. They offer few new contributions of either fact or theory to the great questions they presume to discuss, but it is possible that they may be of some interest as showing how variously the accepted facts and theories appear and appeal to two somewhat eager inquirers.
You and I are fairly typical of the hosts of educated young men and women of upper and middle-class antecedents who are so far from satisfied with life as it is that the man in the street who styles us " knockers " does not come very wide of the mark. But yet we differ, and differ widely; you, in spite of your sturdy independence of mind, are in the main a disciple of Nietzsche, or, in other words, you are an Individualist whose ideal is a splendid aristocratic oligarchy of Beyond Men ruling over a hopelessly submerged rabble; I am a Socialist and a faithful disciple of Marx not that I believe Marx to have been superhuman or infallible, but simply that I have found him to be right in so many cases, that I feel that there is a strong presumption that he is right even where I cannot clearly see that he is.
Download