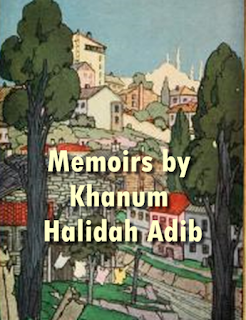 Excerpt:
THIS IS THE STORY OF A LITTLE GIRL
Several instances of sudden consciousness of herself flash into her memory as she muses on her first self-acquaintance. There is the background: the big house in Beshiktash, on a hill overlooking the blue Marmora at a distance, and near at hand the hills of Yildiz with the majestic white buildings surrounded by the rich dark green of pines and willows which are pointed out to her as the residence of his Majesty Abdul Hamid. She is not, however, interested in what the distance held, for the old wisteria-covered house, peeping through the purple flowers, with its many windows flashing in the evening blaze, is dominating her. The garden is on terraces, and there are tall acacias, a low fruit orchard with its spring freshness and glory, and a long primitive vine-trellis casting an enchanting green light and shade on the narrow pathway beneath it. This is the place where she moves and plays. There is a little fountain too, with a pair of lions spouting water from their mouths in the evening hours — making the only music in the twilight there. In the early morning, pigeons,  ever so many pigeons, walk around her, and she quietly watches granny feeding them with crumbs. The wonderful smell, the wonderful colour scheme, and the wonderful feeling of stepping into the world for the first time in that garden. There is another flash, which faintly lights up another house, not granny's any longer, but her father's own house near-by. . . . An intense uneasiness and an obscure feeling, perhaps of undefined fear. The woman whom she calls "mother" is lying in semi-darkness be- side her, in a large bed, clad in her white gown.
There are those two long, silky plaits, which seem to coil with the life of some mysterious coiling animals, and that small, pale face with its unusually long, curly black lashes resting on the sickly pallor of the drawn cheeks. This mother is a thing of mystery and uneasiness to the little girl. She is afraid of her, she is drawn to her, and yet that thing called affection has not taken shape in her heart; there is only a painful sense of dependence on this mother who is quietly fading out from the background of her life.
The only act of that mother which the little girl remembers is when she finds herself sitting on the rather especially comfortable lap and the pale face with its silky lashes is lighted by the tender lustre of the dark eyes while the woman dexterously plays with the little girl's tiny hands and takes each finger and cuts the nails — rather low — for it hurts.
Download