Lucretius On the nature of things 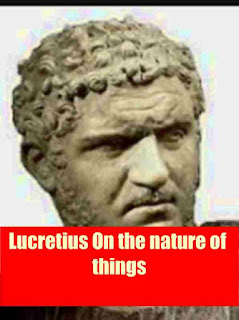 Very interesting poem by Lucretius who predicted evolution before Darwin. he was the student of Epicurus
Excerpt.
This task I have carefully performed j and it will, I trust, be no presumption to say, that he who wishes to know what is in Lucretius, without perusing the original, will learn it from this volume with greater certainty than from any other previously offered to the English reader.
The text immediately followed is that of Forbiger, which may, indeed, be rather called Wakefield for the one varies but little from the other. But I have not dismissed a single page of the translation without consulting the texts of Lambinus,
The words which it has been found necessary to supply are distinguished by Italics. "Where a participle and a verb, having a similar signification, come together in construction, they have occasionally been rendered as two verbs.
Lucretius uses superabundantly, one has occasionally been left out in the translation or been rendered by while, as well as, or in some similar way, for the sake of variety. Any other deviations from the structure of the text.
The linguistic style of the poem is notable. Its author's aim was to render the bald and abstract Greek prose of Epicurus into Latin hexameters at a time when Latin had no philosophic vocabulary. He succeeded by turning common words to technical use. When necessary, he invented words.
His poem and his life, if we may trust Eusebius, were ended in the manner following. " Having been driven to madness by an amatory potion, and having composed several books in the intervals of his insanity, which Cicero afterwards corrected, he died by his own hand in the forty-fourth year of his age." By whom the potion was administered, is conjectured only from a passage in St. Jerome, who says that a certain Lucilia killed her husband or her lover, by giving him a philtre which was intended to secure his love, but of which the effect was to render him insane.
the book details :
Download 20.5 MB - PDF ebook