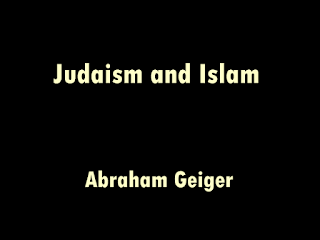 Excerpt
For these three reasons many citations which I might have made from later Islam and later Judaism are excluded, and in like manner many statements also, which do not bear the impress of a borrowing.
On the other hand, the first division had to be added, in order to show the basis on which the probability of a general borrowing from Judaism rests.
After I had once settled the subject in this way, the arrangement of the whole, and more especially of the many disconnected divisions and subdivisions, gave me no less trouble.
The borrowings are of details not of anything comprehensive; they are fragmentary and occasional in that they were chosen according to what Muhammad's reporters knew, and according to what was agreeable to the prophet's individual opinion and aim, consequently, there is no close connection.
How far I have succeeded in reducing these details to order the reader may see and judge from the book itself.
Abraham Geiger was a German rabbi and scholar, considered the founding father of Reform Judaism. Emphasizing Judaism's constant development along with history and universalist traits, Geiger sought to re-formulate received forms and design what he regarded as a religion compliant with modern times.
Download