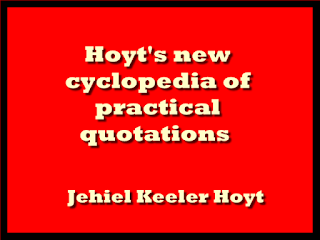 drawn from the speech and literature of all nations, ancient and modern, classic and popular, in English and foreign text. With the names, dates, and nationality of quoted authors, and copious indexes;
Excerpt:
To Amalthea, the nurse of his infancy, Zeus gave a magic horn of plenty, which by his grace was over-brimming no matter what was taken from it. This new edition of a standard work, like the famous cornucopia, contains a freshened and replenished store.
In the garnering of this rich harvest of fruits culled from the vast fields of literature, tribute has been taken from every tree in our literary Eden, so that the reader may share in common with his fellow-creatures, not only the kindly fruits of the earth but also the golden apples plucked from the tree of the knowledge of good and of evil. Since divine discontent is wholesome, we may expect to find some apples of discord as well as of love, the apples of Sodom and of Cain, and a modicum of dead sea fruit. Something there will be of distasteful growth, but the weed's plain heart holds a secret though 'tis shallow rooted.
Many a wayside flower in a crannied nook has carried a message to a humble heart, and because its bloom has attracted public attention, it warrants a place among the choicer blossoms in this horn of plenty filled for all sorts and conditions of men.
The effort of the compiler has been to make the collection the most complete that haB ever been gathered within the covers of a book. There has been provided "Fruit of all kinds, in coat Rough, or smooth rind, or bearded husk, or shell." of which Milton sang in Paradise Lost. In seeking enrichment of his own ideas, a speaker or writer is more concerned with the flavour and odour of the flower or fruit than with its progenitor, therefore the compiler, in gathering and preserving the "wisdom of the wise and experience of the ages," labels each specimen according to its quality (Topical arrangement) rather than source (Author arrangement).\
The latter need is amply met by a biographical index wherein authors are paged. Thus like is with like, and an index to topics, with cross-references, links up combinations of relating attraction. The phrases which are "the parole of literary men the world over," form the basic value of the work. The compiler's blue pencil has hesitated over the prolific output of the "moderns," for public taste is fickle and what is popular today is padding tomorrow. In these stirring times, the press has teemed with utterances of prominent people, but records are inaccurate and unreliable, as has been tested through personal letters.
Locke states: "He that has but ever so little examined the citations of writers cannot doubt how little credit the quotations deserve where the originals are wanting; and consequently, how much fewer quotations of quotations can be relied on." Many omissions may be accounted for by the fact that men of action often prefer the gold of silence to the speech of silver, but on the whole, the Biographical Index is a Who's Who of authors of all times.
It has not been easy to follow Dr Routh's advice, "always to verify your references," for. editions, texts and authorities differ. At times only a hint of authority has been available, but rather than lose an item of value it has been deemed best to retain a meagre suggestion in hope of future discovery. It may be claimed for this work, without fear of contradiction, that no other of its kind contains so full an array of material under topics; none with such a representation of modern writers and speakers; no other includes such a record of modern war phrases, songs and poems; nowhere else are kindred thoughts and expressions so closely connected by cross-references that they may be compared, and in no other collection of quotations have the nerves and arteries of the contents been laid open so plainly through so comprehensive and complete a concordance.
Download warning: The PDF book size is 80 MB. You should read it on Computer. 1388 pages