Heroes and heroines of fiction Dictionary by William Shepard Walsh 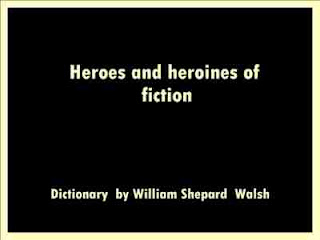 Excerpt:
Roughly speaking, the year 1500 forms the line of cleavage between this volume and its predecessor bearing the subtitle, Modern Prose and Poetry. But no merely arbitrary date can furnish a philosophical and consistent division between a volume so subtitled and a companion volume like the present, dealing not only with the characters of classic and oriental myth (these date from the unknown past) but also with heroes of the folk-lore, legend and tradition of all times and of that non-literary literature known as the ballad and the chapbook.
For instance, Captain Kidd, as a ballad hero, properly belongs to this volume (as the compiler has planned it) even though the eccentric pirate flourished in the eighteenth century. So does Mother Shipton, in her quality as a chapbook heroine, though her fame was established in the seventeenth century. So do Uncle Sam and Brother Jonathan, because they are of purely popular origin.
A distinction worth noting occurs in the case of John Bull. Name and character were originally invented by John Arbuthnot in a purely literary pasquinade. In his original form, therefore, Master Bull belongs to Volume I. But that original and purely literary form has been so transmogrified in the popular imagination, has gathered such an accretion of details from a hundred unidentifiable sources, that the John Bull of today, the protagonist of cartoon and caricature, is a totally different being from the John Bull of Arbuthnot's creation. Therefore this secondary character also obtains a niche in the present volume. Other "heroes and heroines "'have won for themselves dual immortality of a similar sort.
Cleopatra and Julius Caesar, for example, are historic characters, belonging to the classic period of antiquity. But they have obtruded themselves into modern "fiction." When a supreme genius like Shakspear revivifies them in the sixteenth century and makes them to all intents and purposes current topics, their histrionic avatars are entitled to mention in any reference book dealing with the modern drama.
A host of characters also occupy a sort of double ground on each side of the divisional date. Representative instances are afforded by the Carlovingian heroes and heroines who first emerged into popular literature in the ballads and romances of the early middle ages and at last became modern classics in the epic poems of Bojardo, Pulci and Ariosto. Turpin, the pseudo father of Carlo-vingian romance, was the reputed author of the original Roncesvalles myth, and his pretended chronicle, dating back to the tenth century, was the parent of all that magnificent cycle of poems, romances and dramas which crossed our self-elected boundary of A.D. 1500, and has asserted for the Carlovingian tradition a new eminence to modern Italian literature.
Precisely the same thing is true of the early Arthurian romances which in their Tennysonian form are distinct even from so recent a mediaevalist as Sir Thomas Malory. Consequently, it follows that Orlando, or Roland, and their fellow paladins and the princes and princesses of Carlovingian fame require a dual celebration in the volumes of this series. By this means each volume is made complete in itself. But, for the convenience of the reader, cross-references from one volume to another are included in each, and for purposes of brevity, the present volume is always alluded to as Vol. II and the Modern Prose and Poetry as Vol. I, thought the mathematical distinctions, do not appear on the title pages.
Publication date: 1915
Download  Heroes and heroines  of fiction Dictionar 41 MB PDF book