Applied psychology: or Faculties of the mind 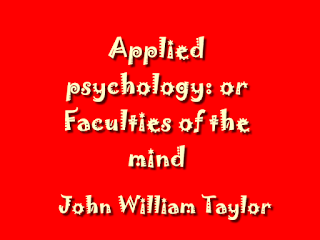 The author ventures to suggest that no one who is thoroughly acquainted with the principles and proofs of what may be justly termed Synthetic, as distinguished from mere Analytic, Phrenology will deny that it forms the most concise and complete system of mental philosophy and practical psychology in existence.
All the actual evidence of modern experimental research, as the writer has endeavored to point out elsewhere, tends to prove conclusively that the brain is not a single organ, brain-segment, or center. The writer's defense and reply to adverse criticism will be found in the introduction.
The system of psychology revealed by Phrenology is greatly in advance of that taught by Lock, Dugald Stewart, and others. For example, their primitive mental powers of Perception, Memory, and Judgment were, in truth, properties of several powers of the mind. According to physiological and phrenological psycho- logy, the mind consists of at least forty-two distinct faculties. Indeed, the evidence in favor of a forty-third faculty appears to be, thus far, reasonably conclusive.
Download