An introduction to anthropology

a general survey of the early history of the human race 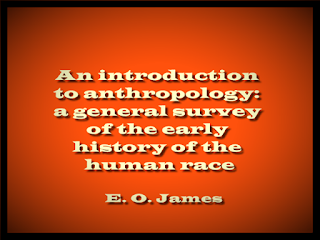 In recent years the progress of scientific research in the department of prehistoric archaeology has been such that there seems to be room for a small volume setting forth the results arrived at by archaeologists in terms that can be understood by ordinary intelligent readers.
The books hitherto published on the subject have been confined for the most part to special aspects of early culture, and, therefore, are not intended to cover the whole field of the life of man before history (i.e., the era prior to written records).
In the selection of subject matter, it has been the purpose of the author to give a resume of the conclusions arrived at by specialists in their several departments, in such a manner as to present a consecutive account of the early history of the human race.
References are given in footnotes to enable the serious student to investigate the evidence for himself and frame his own conclusions. In this way, it is hoped that the book may be of value to those persons who are about to pursue a systematic course of training at the University of Oxford or London for a Diploma in Anthropology, as well as to the general reader. It will be readily understood that in a work of this kind no attempt can be made to enter into detailed investigations of such complex problems as those dealing with the migrations of early culture.
It must be left to Prof. Elliot Smith to verify his hypothesis by comparing the distribution of the various elements belonging to the supposed megalithic culture on a worldwide scale, and to Dr Rivers and Mr. Perry to test the theory by means of more intensive regional studies.
If their conclusions are correct, then a vital transformation must take place in our whole attitude towards the culture of savage people and its supposed primitiveness. But for the present, the writer of an " introduction " to pre-historic archaeology must be content to follow the more generally accepted view and merely state as fairly as possible the points at issue. The same applies to the controversy regarding the age of the Grime's Graves and Cissbury flint-mines.

introduction
A survey of the evolution hypothesis- -. - 1
Chapter I.
The origin and antiquity of man 23
Chapter ii.
The culture of primaeval man 65
Chapter iii.
The manners and customs of primaeval man - - 93
Chapter iv.
The religion of primeval man - - - - - 132
Chapter v.
The beginning of civilization - 180
Chapter vi.
The distribution of races - - - 213
Index 256
Edwin Oliver James was an anthropologist in the field of comparative religion. He was Professor Emeritus of the History and Philosophy of Religion at the University of London, Fellow of University College London and a Fellow of King's College London.
Download PDF book 10 MB