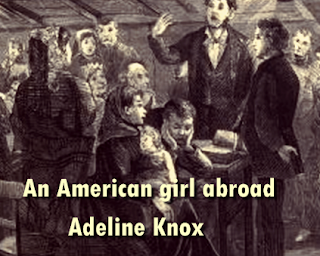 Excerpt
We were going to Europe, Mrs K. and I — alone, with the exception of the ship's company — unprotected, save by Him who watches over the least of his creatures.
We packed our one trunk, upon which both name and nationality were conspicuously blazoned, with the necessaries, not luxuries, of a woman's toilet, and made our simple preparations for departure without a shadow of anxiety. " They who know nothing, fear nothing," said the paterfamilias, but added his consent and blessing.
The rain poured in torrents as we drove down to the wharf But. floods could not have dampened our enthusiasm. A wild Irishman, with a suggestion of spirituous things in his air and general appearance, received us at the foot of the plank, one end of which touched the earth, the other that unexplored region, the steamer.
We followed the direction of his dirty finger, and there fell from our eyes, as it were, scales. In our ignorance, we had expected to find vast space, elegant surroundings, glass, glare, and glitter. We peered into the contracted quarters of the ladies' cabin. One side was filled with boxes and bundles; the other, with the prostrate form of an old lady, her head enveloped in a mammoth ruffle.
We explored the saloon. The purser, with a wen and a gilt-banded cap on his head, was flying about like one distracted. An old gentleman similarly attired, with the exception of the wen, — the surgeon as we afterwards learned, — read a large book complacently in one comer, murmuring gently to himself.
His upper teeth lacked fixity, so to speak; and as they fell with every word, he had the appearance of gnashing them continually at the invisible author. There was a hurrying to and fro of round, fresh-faced stewards in short jackets, a pushing and pulling of trunks and boxes, the sudden appearance and disappearance of nondescript individuals in slouched hats and water-proofs,
Download