A pantheistic view of the universe 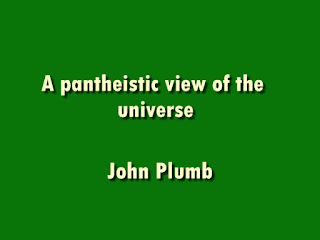 Excerpt:
There are many things about this mysterious Universe of ours which we should all like to know. Our concern is not so much with the facts about the Universe supplied to us by science as with the significance of these facts.
We want to know not only what the Universe is but why it is what it is. This science fails to tell us. What We Want to Know Is the Universe a " fortuitous concourse of atoms " as science sees and deals with it, or is there Mind and purpose behind it all?
If there is, what kind of a mind and what purpose? Does God exist? If so, what connection is there be- tween God and Nature? Is the familiar world we know through our senses the " real " world or do our senses give us a distorted or incomplete picture of it? What do we mean when we say a thing is good or bad? Are the things we value of universal validity or are they subjective judgements on our part?
Is what we call the moral law, a law of universal application valid for all times and all places and under all circumstances, or is it merely a man-made code of conduct designed to further human ends? Are we free agents in what we do? Am I, for example, writing this book of my own free will or am I being compelled to do so because I am what my genetic structure and my environment have made me?

Though the author believes in evolution and survival of the fittest. He thinks God, nature or the spirit of the universe made the world evolve for the best of the whole. He refuses the idea of a benevolent god, he insists that God is all and God in all.

Reality are consisting of parts but the spirit of the universe can not be divided into parts. He blames religions for the father figure of God. "up there" since he believes Gods are in everything.

As the philosophers and theologians cannot agree among themselves what is the common man to believe? Is he to accept a religious doctrine as final truth or is he to carry on with the apparently hopeless task of finding answers to his questions that meet his needs and are at the same time intellectually satisfying? Perhaps the most honest thing he could do would be to admit that he does not and cannot know the answers. If he accepts a religious belief as to the ultimate truth or comes to the conclusion that science will eventually solve all his problems for him, he is, in either case, being dogmatic and making an affirmation without knowing all the relevant facts.

The trouble with the doubters' " don't know " or " cannot know " attitude to the problems of life is that it fails to fulfil a human need. Sitting on the fence waiting for more and more evidence to turn up before making a decision is psychologically demoralising. Human nature, if it is to fulfil itself needs certainty. The agnostic may say that although he is sceptical about anything which cannot be verified by rational means he is still capable of leading the " good " life. He can still make ethical judgements and act on these judgements without believing in what to him is metaphysical nonsense.

But can he or anyone else escape this metaphysical nonsense? If the confirmed sceptic regards human welfare as an end in itself (and most of them do), he still cannot give reasons why human welfare is of value except man's own desire for welfare. What he does is accept, as a fact valid beyond dispute, that human welfare (or human desire) is good in its own right and needs no intellectual justification. For his ultimate value, his end in itself, he too has to enter the realm of metaphysical nonsense. The sceptic's belief that human welfare (or human desire) is good as an end in itself does not spring from reason. In the last analysis, it is an "act of faith ".

All men even agnostics have faith, i.e. an unshakeable belief in some end-in-itself that cannot be justified by reason.

They cannot help themselves. Life would be im- possible if we did not take something on trust. These non-rational ends-in-themselves to which all men subscribe may or may not be linked up with a belief in the supernatural and do not necessarily have " humane " consequences. An end in itself may be a political ideology such as communism or a belief in the superiority of the white (or black, or yellow) race. It may be Humanism, which carries with it the conviction that man's destiny lies in his own hands. But whatever our end-in-itself maybe it gives stability and purpose to life. The believer in a benevolent deity finds comfort in the thought. His hopes for the future both in this world and in the next are high. The atheist too has resolved his doubts. His hopes are centred on this world, not on the next. Although his convictions have led him to believe that there is no heaven, they have also led him to the belief that there is no hell. The atheist has reconciled himself to oblivion in a determinist material Universe.