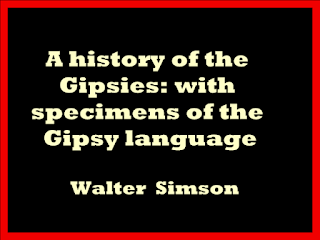 Ever, since entering Great Britain, about the year 1506, the Gipsies have been drawing into their body the blood of the ordinary inhabitants and conforming to their ways; and so prolific has the race been, that there cannot be less than 250,000 Gipsies of all castes, colours, characters, occupations, degrees of education, culture, and position in life, in the British Isles alone, and possibly double that number.
There are many of the same race in the United States of America. Indeed, there have been Gipsies in America from nearly the first day of its settlement; for many of the race were banished to the plantations, often for very trifling offences, and sometimes merely for being by "habit and repute Egyptians."
But as the Gipsy race leaves the tent, and rises to civilization, it bides its nationality from the rest of the world, so great is the prejudice against the name of Gipsy. In Europe and America together, there cannot be less than 4,000,000 Gipsies in existence. John Bunyan, the author of the celebrated Pilgrim's Progress, was one of this singular people, as will be conclusively thrown in the present work. The philosophy of the existence of the Jews, since the dispersion, will also be discussed and established in it.
When the "wonderful story" of the Gipsies is told, as it ought to be told, it constitutes a work of interest to many classes of readers, being a subject unique, distinct from, and unknown to, the rest of the human family. In the present work, the race has been treated of so fully and elaborately, in all its aspects, as in a great measure to fill and satisfy the mind, instead of being, as heretofore, little better than a myth to the understanding of the most intelligent person.
The history of the Gipsies, when thus comprehensively treated, forms a study for the most advanced and cultivated mind, as well as for the youth whose intellectual and literary character is still to be formed; and furnishes, among other things, a system of science not too abstract in its nature, and having for its subject-matter the strongest of human feelings and sympathies. The work also seeks to raise the name of Gipsy out of the dust, where it now lies; while it has been very important bearing on the conversion of the Jews, the advancement of Christianity generally, and the development of historical and moral science.
Download A history of the Gipsies 15 MB PDF book