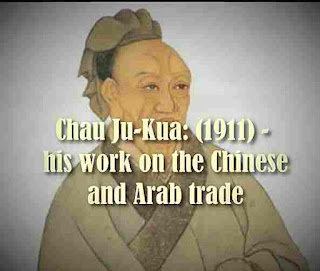 "Description of Barbarous Peoples», or «Records of Foreign Nations», deserves to be named among the most prominent writers on the ethnography and trade of his time.
This is a rare and expensive work, obtainable only as part of certain voluminous collections of reprints. For the benefit of Sinological readers, therefore, Chinese characters and passages have been frequently added, and this has increased the difficulty of printing the book, credit for which is due to the Printing Office of the Imperial Academy of Sciences at St. Petersburg.
His Work on the Chinese and Arab Trade in the twelfth and thirteenth Centuries, entitled Chu-fan-chi,
As throwing light on the medieval trade with the Far East, then in the hands of Arab or Persian merchants, his notes compete successfully with those of Marco Polo and the early Arab and Christian travellers.
The authors of this volume have, therefore, endeavoured to furnish a translation, illustrated by notes derived from other sources, which it is hoped will place readers in the position to fully realize the value of this new Chinese source on an interesting historical subject,
Excerpt from the Chinese publisher's preface:
When King Solomon, in the early part of the tenth century B. C, had opened relations with the Saheans of the Southern coast of Arabia, the land of Punt of the Egyptians, he sent his ships from the head of the Red Sea to the land of Ophir,—generally believed to have been Guzerat or the s Malabar coast. Already at that remote time trade by sea was active between the ports on the south coast of Arabia, the principal of which was where Aden now stands, and Western India.
The ships of the Sabeans carried the products of Arabia and India to the heads of the Red Sea and the Persian Gulf. By the former route, they reached the cities of the Phoenicians; by the latter, they came to Media and Nineveh. Although some accurate particulars concerning the sea route between the Indus and the head of the Red Sea must have reached the Greeks through the voyages of Skylax of Karyanda, made about 512 B. C, it was not until Alexander the Great's invasion of India in 327 B. C, that real knowledge 15 of this vast region and of the sea-route leading there was given to the Western world. Notwithstanding the fact that the writers of the time of Alexander make no mention of the considerable coasting trade which was carried on in their time between the West and India through the medium of the Sabeans,; they were certainly aware of its existence.
We learn from Arrian that, at the time of his death, Alexander was entertaining the scheme of following up the explorations of Nearchus by another expedition to proceed fi-om the mouth of the Euphrates to the head of the Red Sea, presumably for the purpose of diverting the great profits of the sea trade between India and Egypt from the Sabeans to the Greeks.
Fifty years later Ptolemy Philadelphus attempted to carry out this scheme by erecting on the Red Sea the ports of Arsinoe, Myos-hormones and Berenike; but it appears that the ships of Egypt went no further than the port of Aden, where the merchants of India came to sell their wares.
The voyage from southern Arabia, Aden and Merbat to India was first made in small vessels which kept close to the shore and followed its windings, but after sailing with the monsoons became known (sometime between B. C. 10 and A. D. 52), trade was greatly developed; larger ships were used (though the coasting trade was -not abandoned) and a straight course was steered between the Somali, or rather an Arabian coast, to Diul-Sindh or Bharuch, Manga- lo lore or Nelisseram'. Though Nelkunda (Nelisseram, at the head of an estuary the mouth of which is a few miles to the north of Mt. Delli on the Malabar coast) was the farthest point habitually visited by Greek (and probably Sabean) merchants in the first century A. D., Ceylon and the coast of India as far as the Ganges were already known to them, presumably through the reports of native traders.
the book details : Download PDF ebook