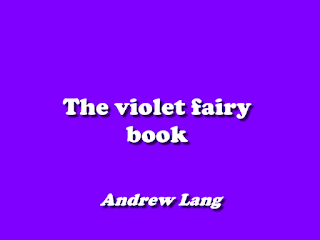 The stories in this Violet Fairy Book, as in all the others of the series, have been translated out of the popular traditional tales in a number of different languages. These stories are as old as anything that men have in- vented.
They are narrated by naked savage women to naked savage children. They have been inherited by our earliest civilized ancestors, who really believed that beasts and trees and stones can talk if they choose, and behave kindly or unkindly.
The stories are full of the oldest ideas of ages when science did not exist, and magic took the place of science. Anybody who has the curiosity to read the ' Legendary Australian Tales,' which Mrs. Langloh Parker has collected from the lips of the Australian savages, will find that these tales are closely akin to our own. Who were the first authors of them nobody knows probably the first men and women?
Eve may have told these tales to amuse Cain and Abel. As people grew more civilized and had kings and queens, princes and princesses, these exalted persons generally were chosen as heroes and heroines. But originally the characters were just a man and a woman,' and a boy,' and a girl,' with crowds of beasts, birds, and fishes, all behaving like human beings.
When the nobles and other people became rich and educated, they forgot the old stories, but the country people did not, and handed them down, with changes at pleasure, from generation to generation. Then learned men collected and printed the country people's stories, and these we have translated, to amuse children. Their tastes remain like the tastes of their naked ancestors, thousands of years ago, and they seem to like fairy tales better than history, poetry, geography, or arithmetic, just as grown-up people like novels Detter than anything else.
PDF book Hosted on Google Drive
Download From Here