The principles of revolution 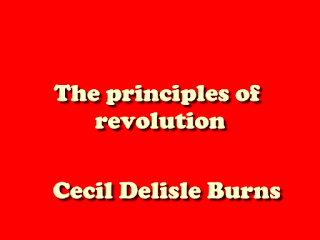 No sensible person desires social chaos: but many persons not altogether devoid of sense desire a change in the constitution of society so radical that it may justly be called revolution. It may be taken for granted, therefore, that no long argument is needed to show that revolution does not mean, and need not involve social chaos. Indeed, the whole tenor of history would go to prove that social chaos is worse than useless as a preparation for social betterment.
It should be understood that chaos and confusion and reckless violence are as much opposed to anything accepted in this book as they are to the feelings of businessmen. Revolution is an entirely different thing.
This is not an apologia, but an exposition of certain historic ideals, and their application to the circumstances of our own time. Clearly, it may be argued that they have no such application: it may be believed that society is sufficiently well organized or sufficiently progressive towards reform for revolutionary ideals to be unmeaning or even impertinent.
To suppose the contrary implies a moral judgment adverse to the main features of our present society, and it must be admitted that such an adverse judgment is accepted as valid in what follows. This, however, does not make the book a propaganda pamphlet.
If anyone differs as to the extent of the evils in present society, he may at least find it useful to consider the attitude of those who disagree with him: for indeed the number of those who condemn the present social structure is great enough to make a considerable force; and whether or not the fact is palatable, it should be recognized to be a fact that social criticism today strikes deeper than a mere objection to this or that government, and social ideals today aim higher than mere reform.
To the opponents of revolutionary change, therefore, the reference to Rousseau and Marx may be some explanation of what they are sometimes told is due to foreign gold or unpatriotic agitators. The forces moving now are too great to be so explained.
[Download From Here ##download##]