The principle of individuality and value (1912) 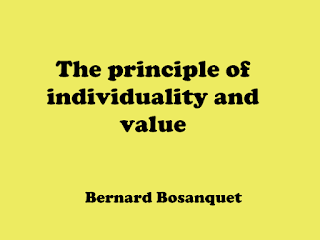 Content:
Introduction, the central experiences. - The concrete universal. - Uniformity and general law not antagonistic to individuality. - The teleology of finite consciousness, a sub-form of individuality. - Bodily basis of mind as a whole of the content. - Self-consciousness is the clue to the typical structure of reality. - Ourselves and the absolute. - Individuality as the logical criterion of value. - Freedom and initiative. - Nature, the self, and the absolute
Bernard Bosanquet FBA was an English philosopher and political theorist, and an influential figure on matters of political and social policy in the late 19th and early 20th centuries. His work influenced but was later subject to criticism by many thinkers, notably Bertrand Russell, John Dewey, and William James.
[Download From Here ##download##]