The history of the devil and the idea of evil

from the earliest times to the present day 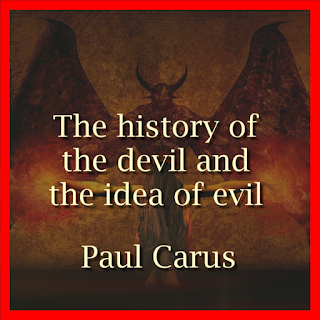 Excerpt from the author's introduction :

Those who do not appreciate the mission of Dualism in the evolution of human thought, and only know its doctrines to be untenable, naturally expect that the future of mankind will be irreligious, and there are freethinkers who declare that Atheism will supersede all the different conceptions of God. But this is not probable.
The monistic tendencies of the age will not destroy but purify and elevate religion. The Animism of the savage is a necessary stage of man's mental evolution: it appears as an error to the higher-developed man of a half-civilized period, but the error contains a truth that naturally develops into a more perfect conception of the surrounding world. Similarly, the religious ideas of the present time are symbols. Taken in their literal meaning, they are untenable, but understood in their symbolical nature they are seeds from which a purer conception of the truth will grow.
The tendencies of philosophic thought prevailing today lead to a positive conception of the world, which replaces symbols with statements of fact and brings with it not a denial of religious allegories but a deeper and more correct conception.
a mixture of Christian and Moslem elements. This remarkable set is distinguished by a special form of dualism. While recognizing the existence of a Supreme Being, their peculiar reverence is given to Satan, chief of the angelic host, who now has the means of doing evil to mankind, and in his restoration will have the power of rewarding them. ' Will not  Satan then reward the poor Izedis, who alone have never spoken ill of him, and have suffered so much for him?' Martyrdom for the rights of Satan! exclaims the German travelers, to whom an old white-bearded Devil-worshipper thus set forth the hopes of his religion." This peculiar creed of the Izedis is similar to the religion of Devil-worshipping savages in so far as the recognition of the good powers is not entirely lacking, but it is, as it were a merely negative element; the positive importance of goodness is not yet recognized.
It is probable that the Persians in prehistoric times were as much Devil- worshippers as are the Izedis. The daevas, the deities of the irresistible forces of nature, were pacified by sacrifices. A recognition of the power of moral endeavor as represented in the personified virtues, the Amesha Spenta, was the product of slow development. Thus in Persia, the Devil-worship of the daevas yielded to the higher religion of God-worship; and this change marks a decided step in advance, resulting soon afterward in the Persians' becoming one of the leading nations of the world. .. Azazel, the God of the Desert. of the Hebrew civilization is not sufficiently known to describe the changes and phases which the Israelitic idea of the God- head had to undergo before it reached the purity of the Yahveh conception. Yet the Israelites also must have had a demon not unlike the Egyptian Typhon, for the custom of sacrificing a goat to Azazel, the demon of the desert, suggests that the Israelites had just emerged from a dualism in which both principles were regarded as equal
Contents:

Good and Evil as Religious Ideas 1

Accad and the Early Semites 29

The Idea of Salvation in Greece and Italy 193

The Demonology of Northern Europe 241

The Age of the Reformation 338