The fallacy of saving PDF ebook 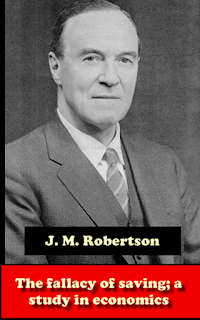 I find that when a young economist presses the criticism he is made to suffer for it by exclusion from educational posts which are in the gift of adherents of the orthodox view. Having personally nothing to fear in this way, I feel the more bound to press the true doctrine, as I regard it, on public attention. I would preface my exposition, however, with an appeal to the candor and leniency alike of economic students and general readers, in consideration of the difficulty which attends all rectifications of abstract theory, and efforts at new economic analysis is perhaps a special degree.
As regards the practical solution propounded in the Second Part, I wish it to be noted that it is evolved as a strict economic solution of the problem leading up to the First, and, though it coincides with some proposals classified as Socialistic, is no a priori application of any abstract theory of society, and does not stand or fall with any such theory.
Throughout the bulk of the literature of modern political economy, down to recent years, there runs the teaching, explicit or implicit, that the practice of parsimony by all and sundry is the surest way to prosperity not only for the savers singly but for the community to which they belong. We have the doctrine very plainly stated in the late Professor Bonamy Price's Chapters on Practical Political Economy: "
The man who saves, be he prince or peasant, is the benefactor of his country; for it is capital which bestows all necessaries and all comforts, which rescues population from poverty, which sustains and increases their numbers. Nothing can be more fatal to the happiness of a people than to bring profit into discredit.", it will be noted, the economist expresses him- as if all saving were made out of traders' profits; but it is not to be supposed, even if he had not made his advice universal, that he wanted to restrict the practice of saving to the profit-makers.
Contents of the book:
the book details : Download PDF ebook