The diary of a nobody 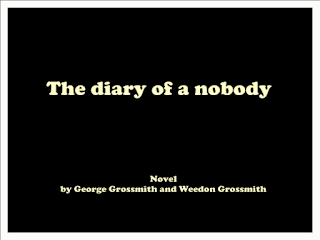 The Diary of a Nobody is an English comic novel written by the brothers George and Weedon Grossmith, with illustrations by the latter. It originated as an intermittent serial in Punch magazine in 1888–89 and first appeared in book form, with extended text and added illustrations, in 1892. The Diary records the daily events in the lives of a London clerk, Charles Pooter, his wife Carrie, his son William Lupin, and numerous friends and acquaintances over a period of 15 months.
for more information visit Wikipedia
The diary begins on 3 April of an unstated year and runs for approximately 15 months. In a short prologue, readers are informed that Charles Pooter and his wife Caroline (Carrie) have just moved to a new home at "The Laurels", Brickfield Terrace, Holloway. Mr. Pooter is a City of London clerk with Perkupps, possibly an accountancy or private banking firm (though their business is not explicitly stated).
[Download From Here ##download##]