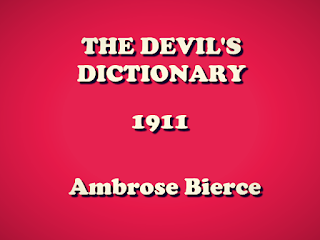 The Devil's Dictionary is a satirical dictionary written by American Civil War soldier, journalist, and writer Ambrose Bierce consisting of common words followed by humorous and satirical definitions. The lexicon was written over three decades as a series of installments for magazines and newspapers. Bierce's witty definitions were imitated and plagiarized for years before he gathered them into books, first as The Cynic's Word Book in 1906 and then in a more complete version as The Devil's Dictionary in 1911.
for more information visit Wikipedia
Excerpt from the book's introduction:
The Devil's Dictionary was begun in a weekly paper in 1881 and was continued in a desultory way and at long intervals until 1906. In that year a large part of it was published in covers with the title The Cynic's Word Book, a name which the author had not the power to reject nor the happiness to approve. To quote the publishers of the present work: "This more reverent title had previously been forced upon him by the religious scruples of the last newspaper in which a part of the work had appeared, with the natural consequence that when it came out in covers the country already had been flooded by its imitators with a score of 'cynic' books — The Cynic's This, The Cynic's That, and The Cynic's 'Other. Most of these books were merely stupid, though some of them added the distinction of silliness. Among them, they brought the word 'cynic' into disfavor so deep that any book bearing it was discredited in advance of publication."
[Download From Here ##download##]