The book of dreams and ghosts 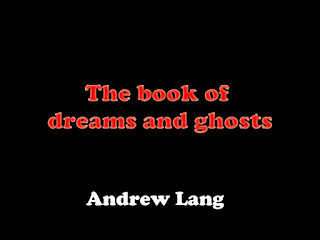 The chief purpose of this book is, if fortune helps, to entertain people interested in the kind of narratives here collected. For the sake of orderly arrangement, the stories are classed in different grades, as they advance from the normal and familiar to the undeniably startling.
At the same time, an account of the current theories of Apparitions is offered, in language as free from technicalities as possible. Ac- cording to modern opinion every " ghost " is a "hallucination," a false perception, the perception of something which is not present. It has not been thought necessary to discuss the psychological and physiological processes involved in perception, real or false. Every ''hallucination" is a perception, "as good and true a sensation as if there were a real object there. The object happens not to be there, that is all."
the visions of insanity, delirium, drugs, drink, remorse, or anxiety, but with "sporadic cases of hallucination, visiting people only once in a lifetime, which seems to be by far the most frequent type". " These," says Mr. James, "are on any theory hard to understand in detail. They are often extraordinarily complete; and the fact that many of them are reported as veridical, that is, as coinciding with real events, such as accidents, deaths, etc., of the persons seen, is an additional complication of the phenomenon." 1 A ghost, if seen, is undeniably so far a hallucination " that it gives the impression of the presence of a real person, in the flesh, blood, and usually clothes. No such person in flesh, blood, and clothes, is actually there. So far, at least, every ghost is a hallucination, "that" in the language of Captain Cuttle, "you may lay to," without offending science, religion, or common-sense. And that, in brief, is the modern doctrine of ghosts.
Andrew Lang FBA was a Scottish poet, novelist, literary critic, and contributor to the field of anthropology. He is best known as a collector of folk and fairy tales. The Andrew Lang lectures at the University of St Andrews are named after him.
[Download From Here ##download##]