She: a history of adventure 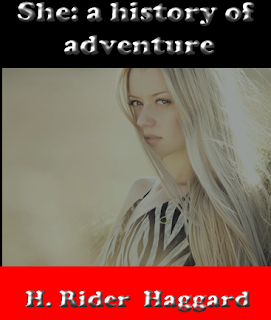 She, subtitled A History of Adventure, is a novel by the English writer H. Rider Haggard, published in book form in 1887 following serialization in The Graphic magazine between October 1886 and January 1887. She was extraordinarily popular upon its release and has never been out of print.
The story is a first-person narrative that follows the journey of Horace Holly and his ward Leo Vincey to a lost kingdom in the African interior.
They encounter a primitive race of natives and a mysterious white queen named Ayesha who reigns as the all-powerful "She" or "She-who-must-be-obeyed". Haggard developed many of the conventions of the lost world genre which countless authors have emulated.
Download via Google drive PDF Book