Occult Japan; or, The way of the gods;

an esoteric study of Japanese personality and possession 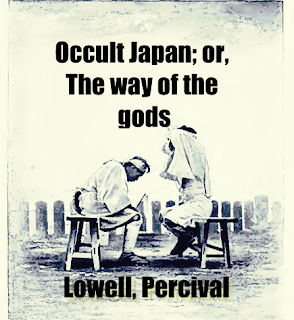 Excerpt:
In the heart of Japan, withdrawn alike by distance and by height from the commonplaces of the every-day world, rises a mountain known as Ontake or the Honorable Peak. It is a fine volcanic mass, sundered by deep valley-clefts from the great Hida-Shinshiu range, amidst which it stands dignifiedly aloof. Active once, it has been inactive now beyond the memory of man. Yet its form lets one divine what it must have been in its day. For upon its summit are the crumbling walls of eight successive craters, piled in parapet up into the sky. It is not dead; it slumbers.
For on its western face a single solfatara sends heavenward long, slender filaments of vapour, faint. breath of what now sleeps beneath; a volcano sunk in a trance. Almost unknown to foreigners, it is well known to the Japanese. For it is perhaps the most sacred of Japan's many sacred peaks. Upon it, every summer, faith tells a rosary of ten thousand pilgrims. Some years ago I chanced to gaze from afar upon this holy mount; and, as the sweep of its sides drew my eye up to where the peak itself stood hidden in a nimbus of cloud, had meant some day to climb it. Partly for this vision, more because of the probable picturesqueness of the route, I found myself doing so with a friend in August 1891.
Beyond the general fact of its sanctity, nothing special was supposed to at- tach to the peak. That the mountain held a mystery was undreamed of. We had reached, after various vicissitudes, as prosaically as is possible in unprosaic Japan, a height of about nine thousand feet, when we suddenly came upon a manifestation as surprising as it was unsuspected. Regardless of us, the veil v/as thrown aside, and we gazed into the beyond. We stood face to face with the gods.
The fathoming of this unexpected revelation resulted in the discovery of a world of esoteric practices as significant as they were widespread. By way of introduction to them, I cannot do more simply than to give my own. Set as the scene of it was upon the summit of that slumbering volcano sunk in trance itself, a presentation to the gods could hardly have been more dramatic.