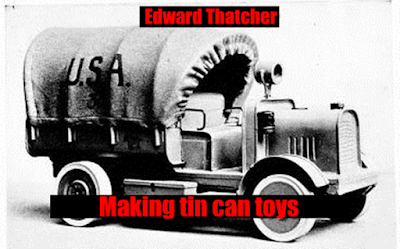 Tin can toy were invented after a fruitless search of the toy shops for a large tin locomotive. I had a long can in my shop at home that I thought could be very easily worked up into a toy locomotive boiler by adding a few fittings, such as a piece of tin rolled up into the form of a smokestack. Part of a small can could be used for a steam dome, or I could use the top part of a certain tooth-powder can, the distributor top of which would look very much like a whistle. A cocoa tin came in very handy for a cab, and a thumb-tack box served for a headlight. 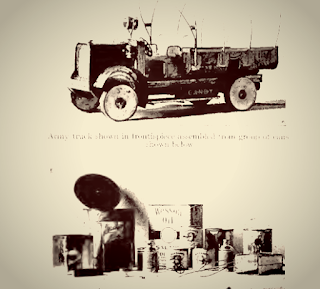 The wheels were made of can lids soldered together, and the toy locomotive was made, which to the joy of my very young son, who has had it in constant service for over a year, and it is still good for many trips at the end of a string. I had always used tin cans for making such articles as water motors, glue pots, melting ladles, mooring buoys for model yachts, etc., but the locomotive was the first toy, made wholly from tin cans, that I had produced, and this suggested other toys. 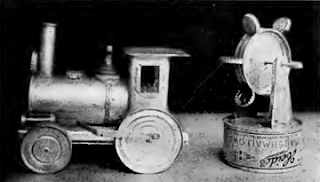 The steam roller was next made. I found that the cans lend themselves very easily to the making of toys, so much of the work is already done. The materials used to make these toys are plentiful and inexpensive — cans are everywhere.
The tools needed are few and easy to use, and I found that so many different and amusing durable toys could be made from used tin cans, and also that everyone seemed to have such fun making the toys, that I decided to use them for teaching purposes. Tin can toy making has been thoroughly tried out in a grade school under a very able teacher, who understands making them. Pupils often, eleven and twelve years of age have proved that these toys are easy to make, and many schools now have the work well established. 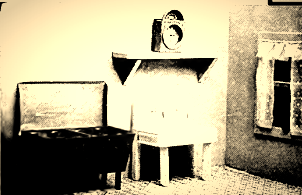 contents:
I. Tin cans 19
Various kinds of cans and boxes preparing
Cans for the work cutting in and opening
Out cans and boxes Tools and appliances 28
Tool lists and costs—laying out and marking
Off workshop appliances
Making a biscuit cutter from a small can,. 44
Cutting the can to size for a biscuit cutter
Punching a hole in tin forming the handle —folding making a sugar scoop by the same Method
Soldering 54
Soft solder sheet tin the process of
Soldering heating apparatus—^electrical
Soldering coppers the common soldering copper
—fluxes—tinning the copper—^heating
Soldering (continued) 71
Preparing a joint for soldering—cleaning
And scraping soldering a practice piece
—
Soldering the handle to the biscuit cutter —a second practice piece—^another method
Of applying solder
Cooky cutters 79
The pine tree design cutting narrow strips
Of tin bending to shape over design
Soldering cooky cutters—the handle Trays 86
Turning over edges on round trays using
The forming mallet—making an ashtray
And matchbox holder 213
A tray candlestick 94
The candle socket—cutting a hole in the
Drip cup making the handle
Riveting loo
Making a pail from a tin can cutting away
The surplus at the rim forming the
Lugs for the handle riveting the lugs in
Position—forming a wire handle
Making a toy auto truck 107
Four ways of making wheels of tin cans:
Making a wheel from a can with soldered
Ends making wheels from rolled rim cans
Two types of wheels made from can lids
Making a toy auto truck {continued) 118
Forming the chassis using the wooden
Roofing folder ^folding using the vise
For short folding using the hatchet stake
For folding
Making a toy auto truck {continued) 127
Making the hood and radiator—cutting the
Vents—soldering on the filler cap
Making a toy auto truck {continued) 135
The dash-board—the seat—assembling the
Truck springs soldering the wheels on
The axles—strip washers
Making a toy auto truck {continued) 146
Truck bodies—^different types of bodies to
Be fitted to the same chassis—the tank truck—the street sprinkler—the coal or Sand truck—the army truck—the ambulance—
The fire engine
Making a toy auto truck {continued) 137
The starting crank—the steering wheel
And column mudguards and running boards —flights, toolboxes, horns, etc..—driver Cabs
Boats 166
The rowboat—the sailboat—the scow—the
Tugboat—the battleship—the ferryboat
Xvii a "Toy locomotive 174
The frame—boiler—cab wheels—cylinders
And connecting rods the smokestack, steam
Dome and whistle, sandbox and headlight
Cars—^a passenger car and some others
Simple mechanical toys 182
Water wheels and sand mills—^a simple steam
Turbine and boiler—^a windmill and tower —^aeroplane weathervane
Candlesticks 192
Wall sconces and a lantern
Camp and kitchen equipment 195
A coffee pot boiling pails—frying pan
Toaster—a camp shower bath canteen or
Hot water bottle ^a matchbox
Preparing the toys for painting 200
Removing surplus solder with scrapers
Making a hoe scraper plumbers* and roofers
Scrapers—scraping and filing—boiling
The toys in a bath—vent holes
Notes on painting the toys 206
Download PDF book