Lucretius on life and death 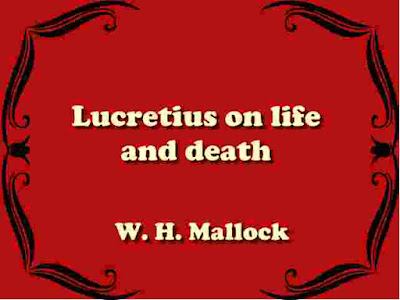 In the metre of Omar Khayyām; to which are appended parallel passages from the original;

Excerpt:
Few philosophical poems in the English language have been more widely read than the poem in which the genius of FitzGerald has introduced us to that of the Persian, Omar Khayyam. More critics than one have remarked on the curious likeness between the philosophy of Omar and that of the Roman, Lucretius, who also, like the Persian, expressed his philosophy in verse.
The difference, however, between the two is not less curious than the likeness; and it occurred to me that it would be a not uninteresting experiment to render parts of Lucretius into the stanza employed by Omar — or rather the English equivalent with which FitzGerald has made us familiar — in order that, by thus reducing them to a common literary denominator, a comparison between them might be more readily made. The philosophy of Lucretius, however, has, like that of Omar, an interest for us in the present day which is far more than literary.
Like Omar, he deals with that precise train of reflection which scientific knowledge, as distinct from the assumptions of faith, tends to rouse in the minds of all who think; and the intellectual position of Lucretius was, in many ways, even nearer than Omar's to that of the modern world. Lucretius was, so far as the knowledge of his time would allow him to be, as completely and as consciously a scientific man and a physicist as Darwin, or Huxley, or any of our contemporary evolutionists. I
ndeed his doctrines, allowing for certain inevitable differences, are astonishingly similar to theirs; and his general conception of the conclusions to which all science is tending may be said to be absolutely identical. He disclaimed the character of an original thinker or discoverer, representing himself merely as a disciple of his great master, Epicurus; but he made the philosophy of his master altogether his own, and as such, we may here speak of it.
the book details : Download 1.3 MB