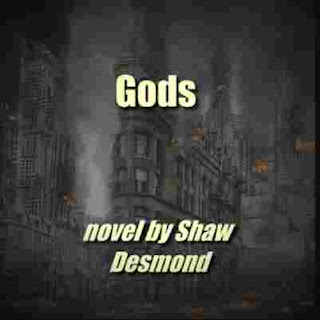 This is quite one of the best of war novels so far. Gods. By Shaw desmond. This is a retrospective story that carries us back to the period of William Booth's early days at the Congress Hall

Contents of The Novel:
-English Review
From Introduction:
The drone of his father's voice came to him where he knelt, losing itself in the zooming of the bee, a great velvety-backed fellow that clambered through the Marechal Niel outside in the scented air of a London June, lulling him to sleep and to dreams. "Oh God! have mercy upon us poor miserable sinners . . . have mercy . . . mercy. . . .
Send down thy lightning upon the stiff-necked and wicked. ...
" The boy found himself checked into a consciousness through which began to steal, irrelevantly, questions the questions he was beginning to ask "God." Who was God? Was He? The interrogation hooked itself incredibly into the entity that was Finn Fontaine, dragging him into full consciousness. "... save us from the worm that dieth not and the fire that is not quenched. ..." He could see his father's trousers, of nondescript seediness, where he crouched small and shrunken before the Lord. Be- yond, his mother, unyielding, held herself stiffly on the thin carpet. It was as though he had seen them for the first time. They were strangers hostile. But God? There was the hairy sackclothed giant which had materialised in the twilight of babyhood, holding Itself aloof and menacing.
That had never been his, though it had held itself, remote, bogeyish, through his seventeen years of life. . . , But God?
There had been those others, those dark playmates of his dreams, sleeping and waking, friendly devils, great and tiny, who had flitted with him through the golden shadow of Adventureland. With them he had travelled the world around, scaling mountains, leaping precipices, hosting in enchanted castles. Or sometimes, lifting with them over its fleeting edge, he had seen it unroll beneath him where the lakes shone like mercury in the forests of the night as he chased towards the sun of red copper that flaunted its first rays upwards over the rim of the darkened earth. Them he loved. . . . But God?
There was the little Methodist chapel down the road with an Indweller, fiery, local, implacable, under whom his father cowered in those dismayed intervals when, to the disgust of his wife and the glory of God, he broke out from the great dead Church of the Established, which held itself in aristocratic segregation a little along the main road of the London suburb on the right-hand side as you pass the painted sign of the "White Hart." But God?
His eye, roving, caught the tiny heap of saintliness and frayed silk which was his grandmother and which bunched itself on its knees of eighty winters between its son and grandson in sweet humility. From where he knelt, his eye, peering through the loophole of thumb and forefinger, searched the network of indigo that veined itself over the diminutive gnarled hands where they pressed themselves against the eyes of china-blue, filmed by the tears of pity and age.
Yes, perhaps there was God the God of forgiveness and love the God of childlike hymns and praiseful psalms quavered in gentle Irish trebles by a fragile figure which smiled to him in the mornings, a minute on the high white altar of the bed, from the edge of which fell the three steps of ascent and descent. But he was not the God of Father Lestrange, the slender dark Jesuit of the rolling red-lit eye, who, mistaking him for a good Catholic, had visited him when he lay sick of the chickenpox. That was another kind of God, a God of strange harshnesses and of as strange indulgences, a God for whom good and evil were the same.
the book details : Download 12.2 MB